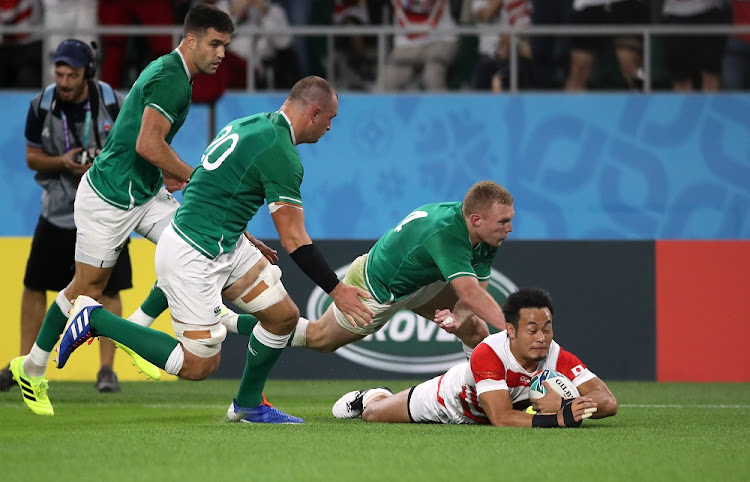 The replacement winger wriggled over on the hour mark to score the winning try of a frenetic Pool A clash as the Brave Blossoms pulled off a breath-taking upset.

Japan's Brave Blossoms can now add the "Shizuoka Shock" to the "Brighton Miracle" after toppling South Africa at the 2015 tournament.

Ireland, who thrashed Scotland 27-3 in their opening game, had looked in control after first-half tries from Garry Ringrose and Rob Kearney.

But they went off the boil as Japan grew into the match, roared on by a partisan crowd of 47,000.

Fukuoka made the difference, wriggling over on the overlap to complete a stunning team try and put the home side in front - where they stayed, leaving Ireland's players slumped on the turf in disbelief.

Talking points from the first week of Rugby World Cup

With the first full week of Rugby World Cup 2019 done and dusted‚ we look at some of the news that has made the week.
Sport
1 year ago

Fly-half Yu Tamura fluffed a makeable penalty, before Ireland took the lead after 13 minutes when the rampaging Ringrose rose brilliantly to snaffle Jack Carty's hanging kick into the corner.

Carty, stepping into for Ireland's talismanic playmaker Johnny Sexton, produced another moment of magic seven minutes later, dinking a clever chip that he managed to tip back to full-back Kearney to crash over.

Japan refused to buckle, however, and Tamura kept them in it with three clutch penalties.

Regular captain Michael Leitch's introduction after half an hour provided an instant impact, but Ireland survived to go into halftime up 12-9.

Tamura missed a three-pointer 14 minutes after the interval that would have tied the game.

Another Tamura penalty extended Japan's advantage to 19-12 with eight minutes remaining before Fukuoka effectively sealed the result with another tremendous burst that kept the ball in Irish territory until the final gong.

Ireland, who came into the tournament as the world's top-ranked team but have never won a World Cup knockout match, will look to bounce back against Russia.

Japan, whose target is a first-ever place in the last eight, know they still have no margin for error with games against Samoa and Scotland to come.

'You don’t make up the numbers‚ so don’t embarrass yourself‚' was the message Namibia’s Rugby World Cup (RWC) squad was sent into battle with before ...
Sport
1 year ago

In a country where everything‚ especially the language, feels as foreign as it can possibly get‚ the Springboks will be drawn even further out of ...
Sport
1 year ago
Next Article