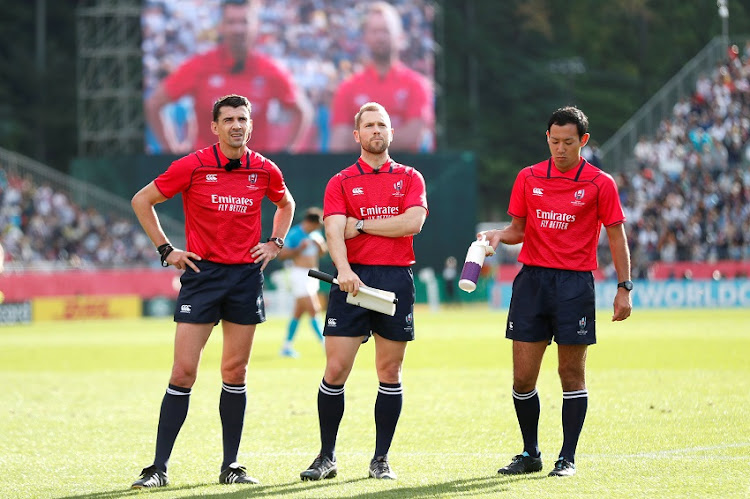 World Rugby took the trouble to gaze inward and found their match officials were inconsistent during the opening weekend of the Rugby World Cup (RWC) in Japan.

The match officials’ failure to spot or adequately deal with incidents of foul play‚ or see blatant infringements blighted the opening round of matches.

The off the ball incidents in the Springboks’ match against the All Blacks lit up Twitter‚ while the fervent view was also often expressed that Steve Hansen’s team got away with more than they ought to in the scrums in Yokohama.

In Australia’s match against Fiji there was outrage at the failure of the match officials to act against Wallabies’ wing Reece Hodge‚ who clattered shoulder first into the head of Peceli Yato.

Yato was hugely instrumental in putting Fiji in the lead before he departed the field concussed.

Hodge has been cited by World Rugby for a ‘dangerous tackle’ in the first half of the clash. He will face a judiciary hearing on Wednesday.

While Wallabies coach Michael Cheika on Monday was surprised that Hodge had been cited‚ Wales coach Warren Gatland hinted that on field sanction would have been more appropriate.

Wales meet Australia in a crunch pool match on Saturday

“That’s not my decision (to make)‚ the judiciary needs to make the call on that.”

Hardly surprising‚ in their statement World Rugby referred to ‘inconsistencies’ rather than blatant errors.

“Following the usual review of matches‚ the match officials team recognise that performances over the opening weekend of Rugby World Cup 2019 were not consistently of the standards set by World Rugby and themselves‚ but World Rugby is confident of the highest standards of officiating moving forward‚” the game’s governing body wrote in the statement.

“Elite match officials are required to make decisions in complex‚ high-pressure situations and there have been initial challenges with the use of technology and team communication‚ which have impacted decision-making. These are already being addressed by the team of 23 match officials to enhance consistency.

“Given this proactive approach‚ a strong team ethic and a superb support structure‚ World Rugby has every confidence in the team to ensure that Rugby World Cup 2019 delivers the highest levels of accurate‚ clear and consistent decision-making‚” the statement read.