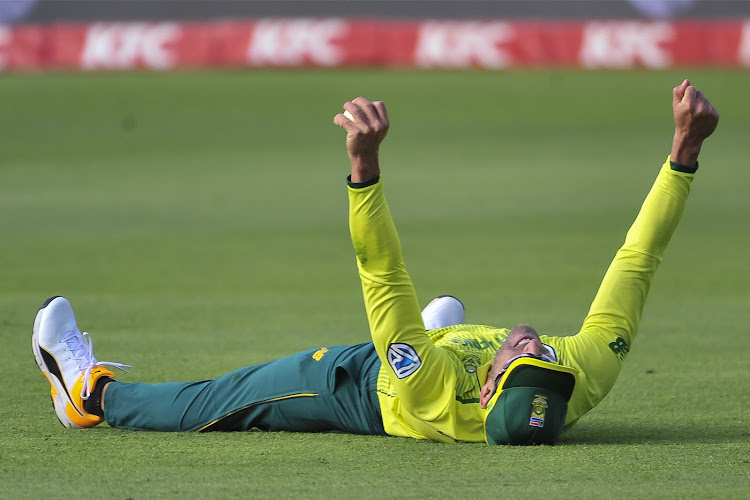 South Africa produced a fighting performance with the ball to edge Australia by 12 runs in a nail-biting  2nd KFC T20 International at St George’s Park in Port Elizabeth on Sunday.

Defending a modest 158 runs, Kagiso Rabada, Lungi Ngidi and finally hometown hero Anrich Nortje produced some superb death bowling under huge pressure to clinch the win and square the series up at 1-1 as the Aussies finished on 146 for six.

The final match will be played at Newlands in Cape Town on Wednesday and if Sunday’s match is anything to go by, the sides look set for another humdinger.

Aussie opener David Warner carried his bat for 67 not out in a brave innings that was just not enough to get his side over the line.

It was a fine way for South Africa to bounce back after suffering a heavy defeat to the tourists in the first match in Johannesburg on Friday.

Quinton de Kock was the other star for the Proteas belting 70 in only 47 deliveries at the top of the order.

The remainder of the Proteas batting order, with the exception of Rassie van der Dussen (37), failed to fire and struggled to come to terms with the pace of the pitch.

The Aussies, who had won eight matches on the bounce, looked set for a comfortable win until Rabada, Ngidi and Nortje produced four late wickets between them to seal the victory.

Ngidi was expensive up front but eventually finished with three for 41.

So often the mainstay of the batting line-up, De Kock once again stood head and shoulders above his team-mates in scoring his sixth half-century in this format of the game.

It was a typically audacious innings from the talented left-hander as he started pulling, lapping and reversing the ball from the outset.

Apart from an aggressive 37 by Van der Dussen there was nothing else to write home about in the Proteas innings.

South Africa’s innings started off at 100 miles an hour with De Kock thrashing it at the top of the order but it progressively slowed down when the SA skipper got out with five overs to go.

After Friday’s debacle at the Wanderers changes were needed in the Proteas batting line-up and Reeza Hendricks was brought in to open with De Kock.

He did manage a beautiful cover drive in his 14 off 17 but generally looked like someone trying to use the opportunity to play himself into the team.

Faf du Plessis came in and hit a boundary in his 15 off 14 before trying to hit a Pat Cummins slower ball over into Park Drive.

David Miller battled with his timing in making 11 not out in 13 balls in the death overs while Van der Dussen at least provided some impetus with 37 off 26.

Admittedly, Kane Richardson was very good at the death for the Aussies and finished up taking two for 21 in his four overs to put the skids on any South African advance.

South Africa's Mignon du Preez celebrated her 100th T20 match by hitting a six and a four in consecutive balls in the final over to power her team to ...
Sport
2 years ago

Proteas team director Mark Boucher said they'd love to have Temba Bavuma back as soon as they can ahead of Sunday’s second T20 against Australia in ...
Sport
2 years ago
Next Article