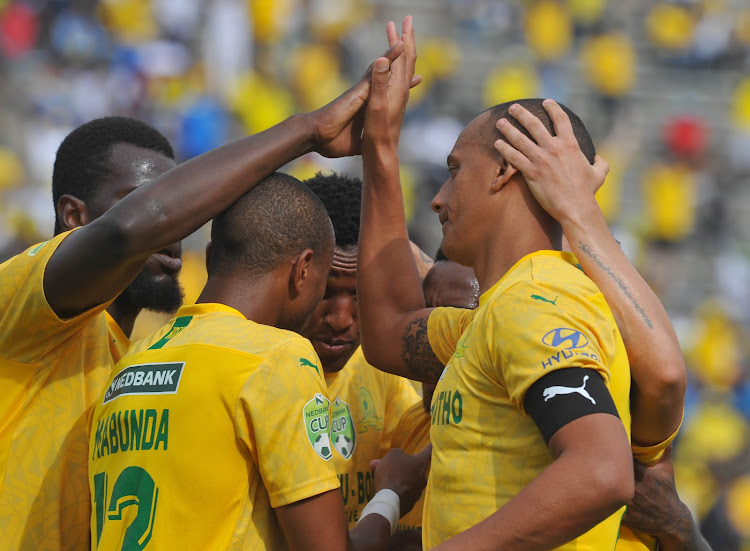 Wayne Arendse celebrates with teammates after scoring one of the two goals for Mamelodi Sundowns.
Image: Sydney Mahlangu/BackpagePix

Mamelodi Sundowns’ second stringers laboured through to the quarterfinals of the Nedbank Cup but did what they needed to overcome history makers Vaal University of Technology (VUT) 2-0 in Atteridgeville on Sunday.

VUT had become the first fourth tier side to beat a topflight team when they eliminated Lamontville Golden Arrows in the first round but there was to be no repeat against the league champions‚ although the upstarts held out for a half and missed a penalty.

Goals from Wayne Arendse and Phakamani Mahlambi saw Sundowns through but it was an easily forgettable performance.

What should have been a chance for the reserves to step up and impress coach Pitso Mosimane was one not taken by the players selected to play in Sundowns’ colours.

“We didn’t make it easy for ourselves. Our technique let us down‚” Mosimane moaned afterwards.

Sundowns would have been hoping for an early goal to put the tie to bed but with many of their own players lacking the right match rhythm‚ that ambition was easily stymied.

VUT did come out with the enthusiasm expected of young men on the biggest stage they will ever play at but after a bright 10-minute spell they dropped behind the ball and look to rather cut off Sundowns’ supply than make an impression of their own.

But to their credit they did force the first corner of the game and the first real shot when Sinesipho Sibisi crashed a powerful goal-bound shot that struck Bangaly Soumaharo.

There were appeals for a handball but television replays showed it struck him on the chest.

Straight after that there was a sitter missed‚ at the other end‚ by Sammy Seabi‚ playing his first game for Sundowns since October.

Sundowns then managed to take control‚ with the impressive Tiyani Mabunda holding it all together‚ but VUT were surprisingly well-structured and consistently had players behind the ball to stifle the spaces.

Nevertheless Lebogang Maboe managed to break through and produce a point-blank stop by Obakeng Naane from close range.

After that there were also chances for Sphelele Mkhulise and Keletso Makgalwa.

Sundowns were their own worst enemy with poor service from wing backs Lyle Lakay and Nicholus Lukhubeni‚ and with Jose Ali Meza running around aimlessly in attack.

Mosimane was visibly irritated by it all.

VUT had little possession and began to give away free-kicks and corners.

It was from a 54th minute corner‚ taken by Meza‚ that Arendse rose to head home as he has done several times for Sundowns before.

But almost immediately VUT could have been back level when a sloppy bit of defending from Lukhubeni saw him trip Tekanolelebogang Mampa and concede a penalty.

But the occasion proved too much for Reitumetse Hlongwane‚ who hit the penalty well wide of the target.

Maboe set up the second goal in the 70th minute for Mahlambi‚ who had just come on‚ but with 20 minutes after that Sundowns should really have gone on and scored more.

Twenty-six years after the birth of Banyana Banyana, the women's national soccer team has finally come of age.
Sport
2 years ago

Sundowns might be recent African champions, but that has not stopped VUT coach Stanley Nkoane spitting fire on his team’s chances against the ...
Sport
2 years ago

Hungry Lions coach Henry Basie says his side are determined to defeat Baroka FC in their Nedbank Cup last-16 clash at Peter Mokaba Stadium on Sunday ...
Sport
2 years ago
Next Article