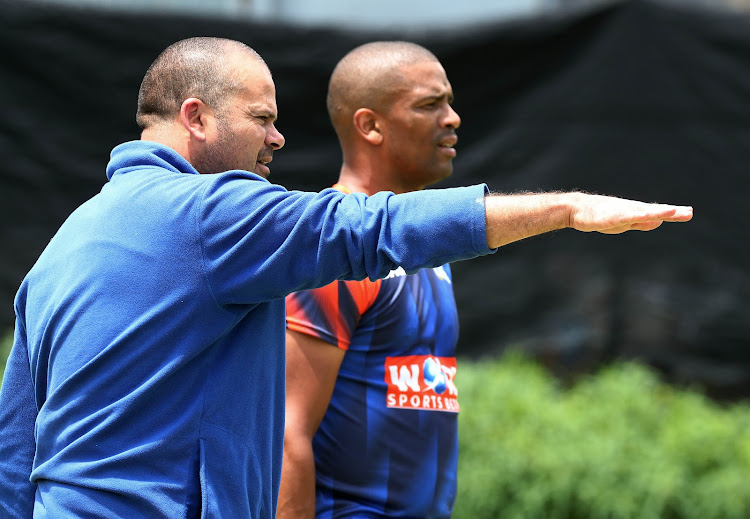 Charl Langeveldt with Vernon Philander during a training session in Pretoria on December 20 2019.
Image: Chris Ricco/BackpagePix

Proteas bowling coach Charl Langeveldt was on holiday in Namibia when acting Director of Cricket at Cricket South Africa (CSA) Graeme Smith started courting him to return to the national team.

Langeveldt was in the fifth month of a contract as bowling coach for Bangladesh‚ where he was working with Russell Domingo‚ when Smith made the call.

"“I was actually on holiday in Namibia and the signal was bad.

"The phone went on and I didn’t see it‚ so I phoned him (Smith) back but I couldn’t hear what he was trying to say‚” said Langeveldt.

“I texted him and in his reply he asked me if there was any chance they could get me back to the Proteas.

"I told him that he had to speak to them (Bangladesh) because I had only been there for five months‚ and I've enjoyed working with the players.

“Both parties were professional in the way they handled the whole thing.

"Bangladesh Cricket Board officials and Jacques Faul made it happen. It happened in a few days and I drove back from Namibia for six hours almost in the night to get to training.”

Langeveldt’s first assignment is getting the best out of frontline fast bowlers Vernon Philander and Kaiso Rabada who will be supported by Beuran Hendricks‚ Dane Paterson‚ Dwaine Pretorius‚ Anrich Nortje and Andile Phehlukwayo against England.

The Proteas are continuing with their preparations for the first of four Tests against England over the next two months in Centurion‚ Newlands‚ Port Elizabeth and Johannesburg.

Rabada said he was excited to have Langeveldt back in the Proteas fold and is forward looking to working with him again as they continue their mission of returning the team to the number one spot on the International Cricket Council (ICC).

“It is nice have Charl back‚" Rabada said.

"I really enjoyed working with him while he was working here previously.

"I learned a lot from him tactically and it was easier to relate to him because he was also an international player.

"The thing that I like about him is that he is not too scientific and believes in players just being natural.

It is good to have him back and he is good value in the change room.”

Proteas captain Faf du Plessis has given the thumbs-up to the recent managerial shake-up at Cricket South Africa (CSA) and in the coaching structures ...
Sport
2 years ago

Jacques Faul: CSA ‘match ready’ for the England series, but ...

Despite all the boardroom imbroglio Cricket South Africa’s (CSA) boss believes the organisation can still put on a show when the Proteas start their ...
Sport
2 years ago
Next Article