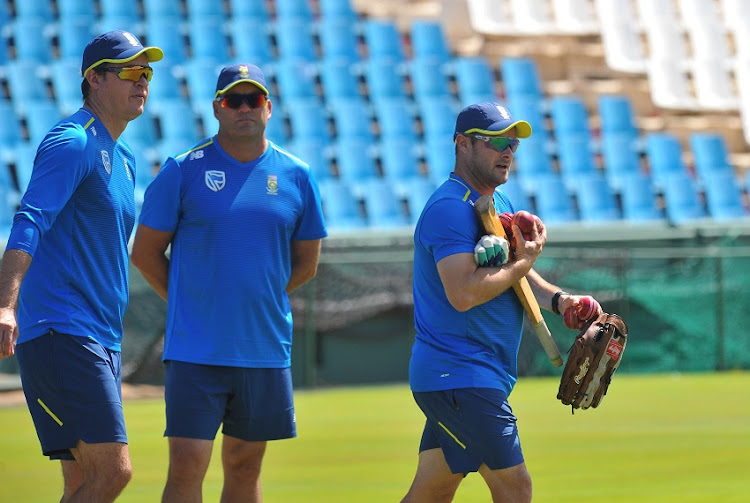 Proteas batting consultant Jacques Kallis is not looking at implementing major changes‚ with a focus instead on putting forward fresh ideas on how players can improve their skills set during the Test series against England.

The four-match series starts at SuperSport Park in Centurion on Boxing Day with Kallis part of the new-look technical team that has Mark Boucher as head coach and Charl Langerveldt in charge of the bowlers.

Speaking at Centurion on Friday afternoon as the Proteas stepped up their preparations for the first Test next week‚ a relaxed Kallis said he is not a big fan of making too many changes.

“I am not big on changing too many things because Dean Elgar won’t come here and start batting with his right hand‚” he said.

“I am not looking at major changes. I am just trying to give players options and ideas and let them realise that you can’t do the same thing every time you walk out to bat.”

Kallis‚ widely regarded as one of the best all-rounders to have played‚ added that the other thing that is top of his agenda is establishing relationships with the players.

“It is about trying to get the relationships with the players‚ getting to see what they are thinking and helping them with game plans‚” he said.

“They have to adapt and I have to make them understand their game plans better. It is not spoon-feeding them but helping to educate them. There is other of off-the-field and mental stuff.

“I think the system is on its way up and things are being taken care of now. We trust the guys that are involved to get us where we need to be.

“From a cricketing point of view‚ I wanted to get involved because I want to help in getting us where we belong. I have always said that when I do something‚ I want to leave it in a better place than it was when I joined.”

Kallis admitted that England are going to be a difficult side to beat and said SA are preparing for a fight.

“I think India was a tough ask – here we are playing at home‚ we know the conditions better and we will feel more confident‚” he said‚ referring to the Proteas’ three-test whitewash on the subcontinent in October.

“I think we will be a more confident side and we will be up the fight. That is something that you always want to see from the team whether we win or lose. The guys must fight and I can guarantee you that with Boucher in charge the guys will fight.

“It is just a matter of getting through that first period‚ realising that you are at home with the crowd behind you. It is like sitting for an exam. When you have prepared properly and studied all the chapters‚ you will be calm.

“England are a good side – it shows where they are in the world and they have played some good cricket over the last while. Any England side that comes to SA is always going to be a decent side and they have some world-class players.

“We wanted to focus on our processes and come up with proper game plans. We are a young side who are also dangerous and they will come up fighting. We are certainly not going to lie down‚ we are confident about the series and we believe we can win it.”