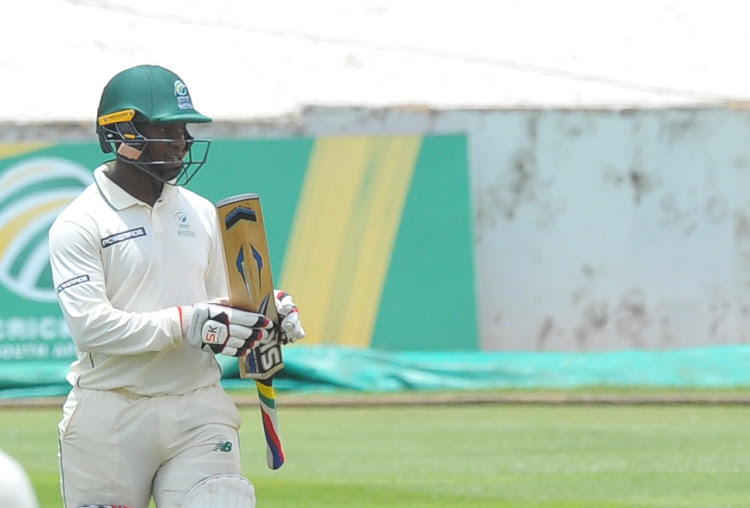 The duo‚ who played for the Cricket South Africa Invitational XI against England in Benoni on Tuesday and Wednesday‚ compiled an impressive 133-run third-wicket stand after they fell to 18/2.

England‚ who batted first‚ made 309/4 on a slow but true Willowmoore Park surface.

Both were dismissed after lunch by Chris Woakes and Anderson‚ but their job was done and they were proud.

England were without Stuart Broad and Jofra Archer‚ who's bug issues not only kept them out of the game‚ but could also miss the three-day First-Class game against South Africa A starting on Friday in Benoni.

Sekhukhune‚ who's born‚ bred and buttered in Benoni and plays for the Easterns‚ said at times he felt spellbound by just facing Anderson at his home ground.

"It was not even about watching the ball.

"It was like: 'Here's this guy and you know what he's capable of doing and you're on the other side facing him.' I was speechless‚” Sekhukhune said.

“It's a massive thing for me. These guys we only see on TV and having the opportunity and privileged of playing against them is a huge thing.”

Snyman‚ a Tshwane product through Hoerskool Menlopark and the University of Pretoria who now plays for Northern Cape‚ was far more forthright.

“It's an honour to play against these guys‚ but also on the other hand‚ you shouldn't play the name that's bowling to you.

"For me‚ it was playing the ball on its merits like any other bowler that is bowling to me‚ but you can also see that this guy is on another level‚” Snyman said.

The 25-year-old Snyman‚ who has four first-class tons‚ said the game was a university session in terms of what he learnt from the England internationals.

Snyman has yet to break through into the Knights franchise team.

“It was a different experience for me facing these world class bowlers‚ but in terms of a batting perspective‚ we looked at how the English batsmen batted on day one.

"When Jonny Bairstow was batting‚ he drew a triangle at the crease‚ we asked him why was he doing that and he said it's to try and play the ball as late as possible‚” Snyman said.

The 22-year-old Sekhukhune was also in awe when he watched his hero Joe Root bat.

Like Snyman‚ the left-hander is yet to break into the Titans team‚ but he's from a bit of cricketing royalty as Proteas women's fast bowler Tumi Sekhukhune is his cousin. “I was watching Joe Root bat and he's one of my favourite cricketers in the world.

"For me‚ it was to see how far I am from the world class guys and also‚ you learn a lot in terms of what the bowlers are doing and thinking‚” Sekhukhune said.

“When I was batting‚ he was talking to the other guys and telling them what I was trying to do.

"I realised his thinking is so quick‚ he can see what a batsman is trying to do. It was such a learning curve.”