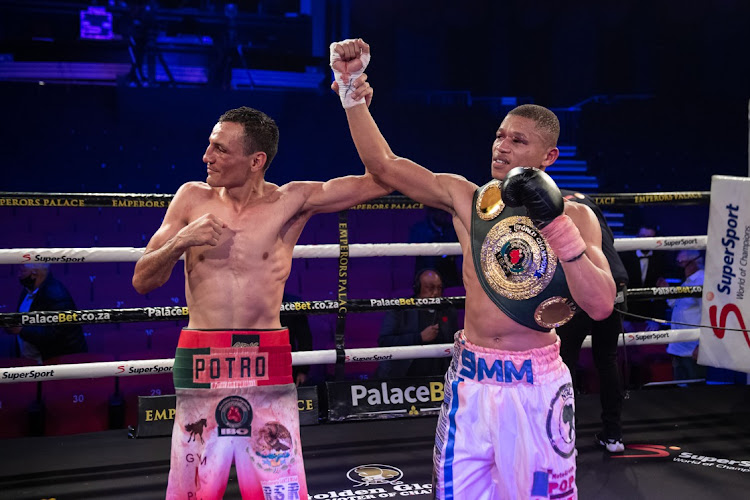 Representatives of the recently launched WBC SA, Larry Weinstein and Alan Norman, are patiently waiting for the head office of the WBC in Mexico to give them the go-ahead for the Africa belt, which Weinstein wants his fighter Ludumo “9mm” Lamati to fight for on May 22.

The BRD Promotions tournament at Booysens Gym is meant to give Lamati action since he has not donned gloves in a competitive match for more than eight months. His last fight was on June 19 last year.

Weinstein manages the promising career of Lamati, who is set to welcome Tanzanian Haidari Mchanjo over 10 rounds. Until the WBC gives Weinstein and Norman the go-ahead, Boxing SA’s sanctioning committee cannot grant permission for that belt to be contested.

“The WBC has not sanctioned the fight. We are waiting for the letter from the WBC but if it does not come we will have an international fight for Lamati,” said Weinstein yesterday. “The belt – called Ubuntu – is ready and it is very beautiful. BSA is happy to sanction it but the committee wants a letter from the WBC.”

The WBC is represented in SA by Peter Ngatane. When called for comment on the matter, he said: “I told Mandla Ntlanganiso [BSA COO] that before BSA can process everything he must ask for a sanctioning letter from the WBC. The WBC has never had it. I wrote to the WBC president regarding this WBC South Africa title they are talking about because it is foreign to us.”

There seem to be issues between Ngatane and the representatives of the WBC SA. Ngatane did not attend the launch of the WBC SA in September last year. His absence and the non-attendance by BSA raised eyebrows.

WBC president Mauricio Sulaiman addressed guests virtually and he expressed his support and enthusiasm for the new initiative.

It will be an honour for Mawande Mbusi to lose to him in their six-rounder, Joshua “TKO” Studdard, the assertive boxer from Sophiatown, boasted ...
Sport
3 weeks ago

Before Bopape dethroned Nkululeko Mhlongo via an 11th round knockout on Friday evening, Alexandra had not had a national champion for over 30 years.
Sport
3 weeks ago

Xolani Mcotheli challenges Prince Dlomo at Booysens Gym on Sunday for the SA junior-welterweight title that Mcotheli lost to Dlomo in March last ...
Sport
3 weeks ago

It is the severe punishment he absorbed that informs the advice for this veteran ring warrior from eSshowe in KwaZulu-Natal to quit before he suffers ...
Sport
3 weeks ago
Next Article