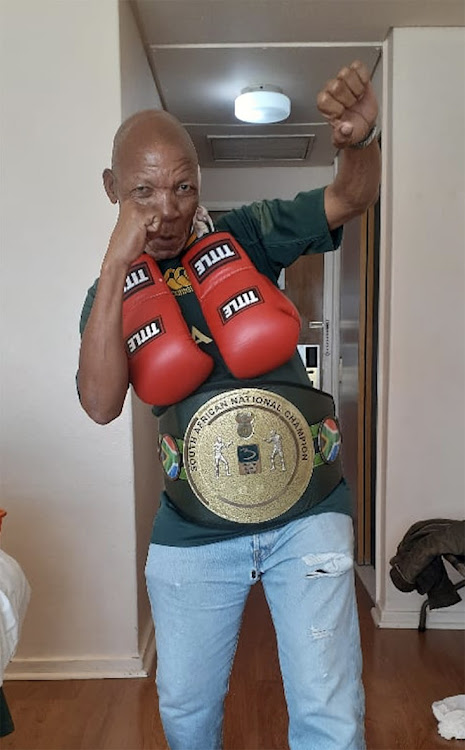 Hooray! Alexandra has a new boxing champion. John “Section 29” Bopape is the man and he has dedicated his middleweight belt to all the “lovely” people of Gomora, as Alex is also known as.

Before Bopape dethroned Nkululeko Mhlongo via an 11th round knockout on Friday evening, Alexandra had not had a national champion for over 30 years. Bopape’s trainer Bushy Mabele, 71, says it is for that reason that the champion’s victory is so special.

“I am still asking myself if this is for real,” Mabele said yesterday.

"It’s a bittersweet moment for me because I am old. I want to get somebody with passion to take over from me. I grew up in this sport which requires respect, passion and hard work. I boxed first before becoming a trainer.”

Regarding Bopape’s nickname “Section 29”, Mabele explained that his fighter used to bunk training. “Back then you would be arrested if police patrolling the streets found you loitering around the streets during the day; the charge was Section 29. So, I jokingly warned John that he could find himself behind bars if he continued bunking gym and he will be charged under Section 29, and funny I began calling him that and it stuck with him.”

Mabele and Bopape have been loyal to each other even when the boxer was losing fights to opponents he should have easily dispatched. Their union is like that of trainer Theo Mthembu and boxer Jacob “Baby Jake” Matlala. The pint-sized fighter was written off as a no hoper but Mthembu stood by him and later on the shortest boxer in the world won the WBO, WBU and IBA belts, and the very detractors who advised him to quit, sang his praises.

Bopape paid tribute to locals in Alexandra for their support.

“The love they showed me on my arrival from Bloemfontein was touching,” said the 30-year-old fighter  who still lives in Alexandra.

“The street was full with people welcoming us. I did not expect that type of reception; it was overwhelming. That is why I am dedicating this title to all in Gomora.

“I am the first SA champion for my coach and this is very special to us and Alexandra.”

Bopape has 90 days to enjoy his reign before making a voluntary defence against an opponent of choice from the top 10 ratings.

Xolani Mcotheli challenges Prince Dlomo at Booysens Gym on Sunday for the SA junior-welterweight title that Mcotheli lost to Dlomo in March last ...
Sport
3 weeks ago

It is the severe punishment he absorbed that informs the advice for this veteran ring warrior from eSshowe in KwaZulu-Natal to quit before he suffers ...
Sport
3 weeks ago

Moruti aware of drug claims against company he signed for

Moruti Mthalane is aware that MTK Global, which confirmed the signing of the boxer three years ago, has closed shop after damaging allegations ...
Sport
4 weeks ago

Mhlongo vows to discipline Bopape in the ring

The antagonism between adversaries Nkululeko Mhlongo and John Bopape, especially from Mhlongo, is scary.
Sport
4 weeks ago
Next Article