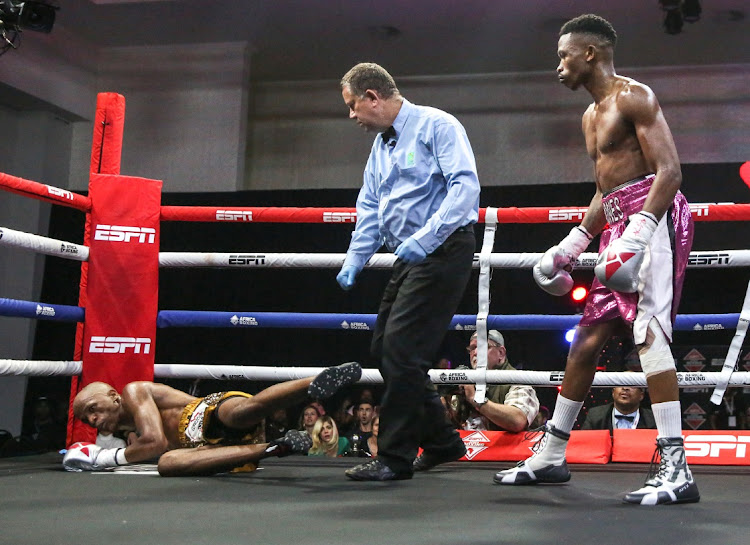 Fight fans reacted with astonishment to how efficient Mzuvukile “Old Bones” Magwaca ended his comeback fight in four minutes against Sanele Maduna at The Galleria in Sandton.

The talented former WBF, IBF Intercontinental and WBA International bantamweight champion, whose promising career seemed to have ended when he was shot in the left leg by thugs during a robbery at his house in Khayelitsha in 2018, dropped Maduna with a well-executed straight punch to the chin.

Referee David van Niewenhuizen counted Maduna out in less in one minute in the second round.

That was Magwaca’s 12th knockout in 21 wins while Maduna tasted defeat in six fights.

Professional fighter Ricky Tshabalala, who did commentary for ESPN Africa, which broadcast the tournament, said: “Four years out of action and do this. Wow!  What a comeback.”

Promoter Sifiso Shongwe, whose Walt Disney Company Africa staged the fight that formed part of the nine- bout card, said: “I have not seen such a spectacular knockdown in a long time."

But the action in the first three fights did not match the expectations. There was nothing captivating until the six-rounder between Sipho Mahlangu and Ntethelo Nkosi, which Nkosi won on points.

In the main supporting bout, Bangile Nyangani cruised to a landslide points win to retain the SA mini- flyweight belt against Loyiso Ngatweni.

The main event lived up to its status as national super-middleweight champion Cowin Ray cemented his kingship with a third-round demolition of Andile Mntungwa. Referee Simon Mokadi took too long before eventually rescuing defenceless Mntungwa, who had been hit with a barrage of vicious blows while trapped against the ropes.

Ashley Sexton is in hospital after his fifth-round technical knockout loss to Sabelo Ngebinyana for the vacant IBF International bantamweight title, ...
Sport
1 month ago

Tyson Fury emerged unscathed from a turbulent fight week to cement his place among the greats of heavyweight boxing with a stunning TKO win over ...
Sport
1 month ago

Today marks 21 years since SA proved to be a global player in hosting “A” list sporting events.
Sport
1 month ago

Promoter Lebo Mahoko has promised fight fans a night of blood, sweat and tears throughout his Dream Team boxing tournament at Doctor Molemela Indoor ...
Sport
1 month ago
Next Article