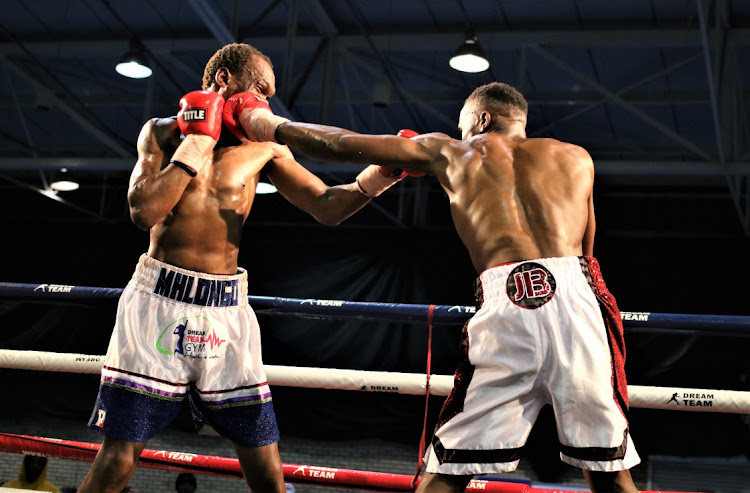 John Bopape scores with a jab on the chin of Nkululeko Mhlongo who lost the SA middleweight belt by a knockout in the 11th round in Bloemfontein on Friday.
Image: Brian Wysoke

As the saying goes, when the curtain falls, it is time to go.

It fell on former SA, WBF Intercontinental and WBA Pan African junior middleweight champion Nkululeko “Bulldog” Mhlongo on Friday night when he was badly knocked out in the 11th round in his failed mandatory defence against John “Section 29” Bopape in front of a big crowd at a packed Dr Molemela Indoor Sports Centre in Mangaung, Bloemfontein.

It is the severe punishment he absorbed that informs the advice for this veteran ring warrior from eSshowe in KwaZulu-Natal to quit before he suffers brain damage. Springkaan Khongoane, who manned his corner, should have thrown in the towel after round five.

Bopape dropped him with a looping right hand on the side of the head early in round 11. That blow landed where Emmany Kalombo planted his devastating right hand, which knocked out Mhlongo in round five in 2018. It disorientated him on Friday and his legs gave in. Sensing victory, Bopape pressed harder and landed two devastating combinations and it was load-shedding on Mhlongo. It was a sad and emotional moment to see this 40-year-old fighter in that state.

He’s been around since 2004, and has forever been involved in punishing fights against Isaac Hlatshwayo, Page Tshesane, Sihulule Sidzumo, Brandon Thysse and Emmany Kalombo, who knocked him out in five rounds, and his first fight with Bopape, although he won most of them. What makes it even worse is that Mhlongo does not have a good defence and he takes punches with his head as he believes he is a man of steel.

Signs of wear and tear were evident on Friday night. He could not even perform his usual theatrical act of fighting with one hand while hiding the other behind his back. That is how tough the fight was for him.

“Look, I spoke to him and advised him to think carefully about his future,” said promoter Lebo Mahoko, who has been very good to Mhlongo. “I can’t dictate to him what to do.”

The tournament attracted the likes of Free State MEC for sports Limakatso Mahasa, BSA chair Luthando Jack, acting CEO Nsikayezwe Sithole and COO Mandla Ntlanganiso. Mhlongo enjoyed support from the crowd as he was promoted by that province’s Mahoko who co-hosted the Freedom Day Celebration tournament with the Free State government.

But their favourite fighter could not get going. Naturally, Mhlongo is a slow starter who gets into motion as a fight progresses, but everything was just off on Friday – his timing was poor, conditioning questionable and his punches lacked the firepower that has previously left 18 of his 23 opponents counting stars.

At least Mhlongo has the SA junior middleweight, which he defended five times to claim the outright ownership to show for his commitment and time spent in the fight game. He has been with several trainers including Nick Durandt, Jabulani Malinga, Bernie Pailman, Sechaba Mabuya, Lehlohonolo Ledwaba and Vusi Mtolo.

Bopape’s hunger, determination, resilience and conditioning was beyond belief.  He looked to have studied Mhlongo’s style intensively since their first fight, which Bopape won in Durban last year February.

Ushered to war by his unassuming long-time trainer Bushy Mabele, Bopape – from Alexandra – pushed Mhlongo backwards, keeping him on the back foot to minimise his power, and this affected Mhlongo’s balance and gave Bopape the opportunity to come forward and score with stabbing jabs and combinations to the head. As rounds passed, Mhlongo was unable to adjust and found himself being thoroughly outboxed.

Earlier on the night, Khensahosi Makondo earned a hard-fought points win against tough prospect and previously undefeated Jackson Kapteinl while Matshidiso Mokebisi managed to put aside the pain of losing her father to score a points win over Zimbabwean Chiedza Homakona.

Zolile Miya defeated Mpho Seforo on points over six rounds, while Meegan King stopped Kagiso Hlungwani in the third round.

Moruti aware of drug claims against company he signed for

Moruti Mthalane is aware that MTK Global, which confirmed the signing of the boxer three years ago, has closed shop after damaging allegations ...
Sport
4 weeks ago

Mhlongo vows to discipline Bopape in the ring

The antagonism between adversaries Nkululeko Mhlongo and John Bopape, especially from Mhlongo, is scary.
Sport
4 weeks ago

Empathy is what WBC cruiserweight boxing world champion Ilunga “Junior” Makabu offered to Lebo Mashitoa when he surprised him with a visit at his ...
Sport
4 weeks ago

It is unclear if Khensahosi Makondo is being modest or genuine when he says he does not endorse the opinion from the general fight public that his ...
Sport
4 weeks ago
Next Article