Coach reveals Maritzburg lost out on Peprah due to relegation threat 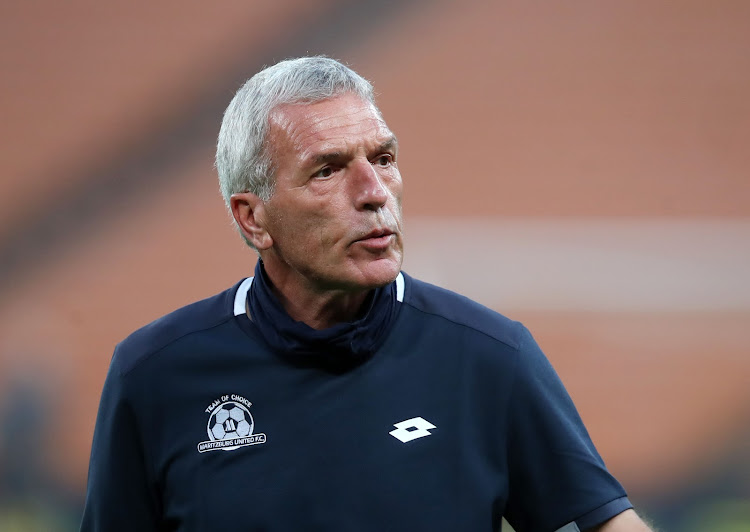 Maritzburg United coach Ernst Middendorp has detailed how being relegation candidates has affected their transfer dealings in recent times, revealing they were courting striker Kwame Peprah before he joined Orlando Pirates.

Maritzburg have become synonymous with battling relegation in recent seasons and again this season they find themselves at risk of going down. The Team of Choice face crosstown rivals Royal AM in a league tie at Harry Gwala Stadium tonight (7.30pm).

Maritzburg's relegation battles have seen them miss out on some decent players, according to Middendorp. The Team of Choice trainer has disclosed some of the players they wanted to sign opted to join other teams because of Maritzburg's uncertainty as to whether they'll be relegated or survive, naming Peprah as one of those players they were in talks with but he ended up not coming because of the club's precarious league position.

"Just to give you an example with Peprah in Ghana. My relationship in Ghana with the teams over there and with the people who're representing him, we had a lot of discussions far back but in the end we couldn't go forward [because at that time it wasn't clear whether Maritzburgsurvive],'' said Middendorp.

"I understand, that's a little bit of a situation where we're in at the moment again. Players always want to know if they'll be playing in the PSL or not. If we're approaching a player at the moment, in April or May, it's difficult."

Last season Maritzburg finished 13th on the log, avoiding the play-offs by collecting just three points more than Chippa, who would survive through winning them. Middendorp appears to be banking on their experience of fighting relegation to help them again this term

"We try to find harmony and direction in our team to pick up points. For us it is not a totally new situation, being in this battle of trying to secure our PSL status. We're moving forward day by day. We have a certain experience at this level,'' stated the Maritzburg mentor.

Baroka head coach Vincent Kobola has acknowledged the tough task of saving the club from relegation in the DStv Premiership. The mission to beat the ...
Sport
2 weeks ago

TS Galaxy midfielder Lindokuhle Mbatha has urged his side to show the same performance they did when they edged Orlando Pirates 1-0 at Mbombela ...
Sport
2 weeks ago

Soweto giants Orlando Pirates were on Tuesday afternoon fined R100,000 which is suspended for 12 months, and were asked to send a written apology to ...
Sport
2 weeks ago

Former Orlando Pirates defender Gavin Lane has accused the club’s current players of not being hungry enough following another disappointing season.
Sport
2 weeks ago
Next Article