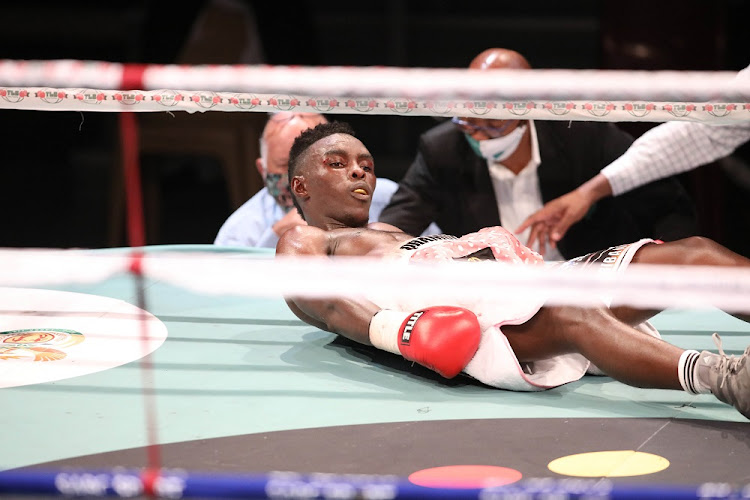 Sibusio “Prince” Dlomo, the 100-1 dark horse, produced Boxing SA’s upset of the year at Klipspruit Sports Centre in Pimville, Soweto, when he knocked down 22-10 hot favourite Xolisani “Nomeva” Ndongeni in the fifth round of their eight round scheduled junior welterweight bout on Saturday.

Some pundits labelled the event a mismatch and that Boxing SA’s sanctioning committee should not have given the go-ahead. Their concerns were based on the fact that 32-year-old Dlomo has not even won a provincial title in a career spanning nine years. Dlomo went into the fight with an unimpressive record of 11 losses, 10 wins and a draw while Ndongeni has won two SA titles in two weight divisions as well as the IBO and WBD belts.

Ndongeni had a single defeat by Devin Haney (now WBC champion) in the USA against 26 wins. But Dlomo turned the tables on him, handing him his first loss in a local ring. What made it even worse was that Dlomo did that in style – a clean KO – which was Ndongeni’s first. A well-executed left hook to the jaw lifted Ndongeni off the ground before his stiff body bounced on the canvass where he was counted out.

Charity Mukondeleli – who ushered Dlomo into battle – said: “I said it long time ago that Ndongeni must not underestimate Prince because he is not a quality boxer. I was not shocked by what happened because our plan was to keep an eye on him and to make him commit a mistake and punish him.”

Dlomo said: “I slept well after knocking out Ndongeni. I dreamt I was flying. Ndongeni said bad things about me and I went in there with one thing in my mind – that I must kill him or he will kill me.”

Nomeva threatens to quit boxing if he loses to Dlomo

Ndongeni insisted that the fight could have been his last. “Like I said before the fight that if I lose to Dlomo, I will quit. I am going to sit down, digest everything and I will make a decision. I never saw Prince as someone who will beat me and not because I undermined him but I simply believe he is not in my league – but he caught me with a good blow and yes, I only saw what happened to me when I was lying on my back. Good luck for him.”

Meanwhile, Thulani “Tulz” Mbenge laboured over 10 one-sided rounds to register a lopsided points win over Kuvesa Katembo for the vacant ABU welterweight title. The much-hyped bout – that topped TLB Promotion bill – failed to live up to its midweek build-up. Scores were 100-91; 98-93 and 98-92.

Khaya Busakwe retained the Gauteng lightweight title with a third round stoppage over Kabelo Bikitsha. Thato Bonokonae stopped Doctor Ntsele in the fourth round of their six rounder. Lucky Monyeabe won a points decision over six rounds against Sifiso Hlongwane. Ellen Simwaka pummelled Melissa Miller into submission over three rounds in the only women’s bout. Mandlenkosi Sibusisio outpointed Clement Pilusa over four rounds. There were no fans as per Covid-19 level 1 health protocols.