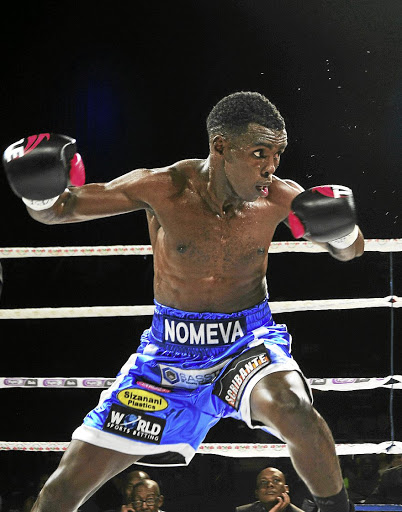 Former SA, IBO and WBF lightweight boxing champion Xolisani "Nomeva" Ndongeni laughed when asked for a reaction to the call by trainers and brothers Peter, Patrick and Vus'Umuzi Malinga for his showdown with their charge, recently-crowned WBF champion Ayanda "Greyhound" Nkosi.

"This is a tasteless joke because it is not April Fool's Day where one expects such hoaxes. These guys said it loud and clear after Ayanda won the WBF title last month, that they will not fight me because I have nothing to bring to the table. I am confused by what you've just said because I am the same Ndongeni who has nothing to bring to the table."

When told that the sons of late top trainer Jabulani Malinga from Katlehong said Ndongeni is still a big name fighter and victory for Nkosi against him will give their boxer recognition, Ndongeni said: "I'm glad if they know that I am a big-name fighter. But my response to their call is that I don't fight matches that are of interest to people other than myself. But still I don't have a problem fighting Ayanda if the money is good. They must go and speak to Ayanda's promoter [Elias and Fanakhe Tshabalala]. I will beat Ayanda the same way I beat Patrick."

Nkosi won the WBF belt with a seventh round stoppage of Emmanuel Lopez from Mexico last month at the Portuguese Hall in Turffontein, Johannesburg, where Ndongeni stopped Tanzanian Mbena Rajab over six rounds.

Meanwhile, veteran boxing judge Joseph Chaane has passed on. BSA member of the sanctioning committee doctor Muziwakhe Qobose said Chaane, who has been an official for over two decades, passed away on Thursday.

Imms Moses has warned the South African fight public about what is in store for them this weekend.
Sport
2 years ago
Next Article