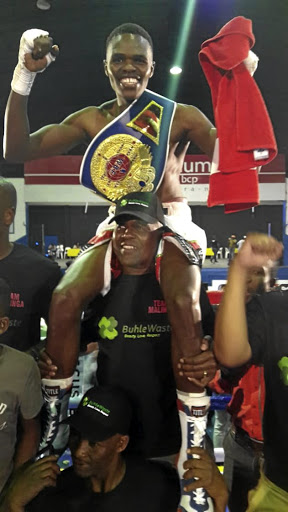 Ayanda Nkosi is carried by a fan after he was crowned the WBF lightweight champion on Saturday night.
Image: Manny Fernandez

The saying that a light needs darkness to shine can be associated with boxer, Ayanda Nkosi.

The twinkling star continues to shine brightly with every fight.

Strange as it may sound, credit must go to Thembani Hobyani who spoiled Nkosi's good run as a newcomer in boxing with a defeat in his fifth professional fight in 2015.

That loss - after four straight wins - became a wake-up call to brothers - Peter, Thami and Vus'muzi Malinga. Based in Katlehong, on the East Rand. They upped their game, and brought into the fore their combined experience as former fighters, teaching Nkosi the basics.

He bounced back to win the Gauteng and WBA Pan African lightweight belts, and later captured the SA title from the vastly experienced campaigner, Thompson Mokwana, in June.

On Saturday, the well-schooled Nkosi pulverised Emmanuel Lopez into submission in the seventh round to add the World Boxing Federation strap to his collection of boxing belts. There were mixed emotions about that match-up which headlined Fantastic 2 Boxing Promotions bill at the Portuguese Hall, south of Johannesburg.

Some felt Nkosi was overmatched against the former WBA champion, while others said it was a fine match-up against Lopez, who boasted 30 wins from 42 bouts, and would allow Nkosi to grow in the sport against an experienced fighter . The tough as teak lanky boxer looked superb, and it came as no shock when Lopez' corner threw in the towel in round seven.

Meanwhile, Phumelela Cafu proved too strong for Hamza Mchanko who hails from Tanzania in Limpopo. His corner threw in the towel in round five.

The corner realised Mchanko was a punching bag, and in order to be able to continue with his boxing career, they had to intervene. Cafu was crowned the new WBF International flyweight champion.

Xolisani "Nomeva" Ndongeni did the same to Mbena Rajab, who after being down twice, went out to meet Ndongeni in the centre of the ring in round six with an enthusiasm of a man facing a walk to the electric chair.

A refined Bukiwe "Anaconda" Nonina overwhelmed Flora Machez in every department over eight rounds to register a points win. Scores were 80-72 (twice) and 80-71. Credit should go to the boxer's new management - trainer Phumzile Matyhila and manager Makhosi Ngcoza. They have worked hard to turn Nonina into a brilliant boxer - a different fighter to the "runner" she was in the past.