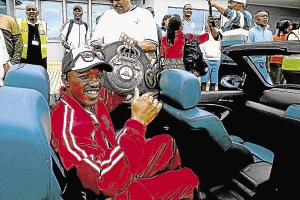 Ex-world champ Simpiwe Vetyeka, who was toast of the town of his East London hometown after defeating Chris John in Australia, is now back in the gym as trainer. /ALAN EASON

Simpiwe "V12" Vetyeka is living proof that when one door closes, another opens.

His fruitful boxing career - which saw him become the first local boxer to unify titles in 2013 - came to an abrupt end in 2018 when he was hit by a passing vehicle while opening the door of his own on Amalinda Road in East London.

The 39 year old former SA champion - who currently works for the Cecil Makiwane Hospital in Mdantsane - has opened another chapter in his life as an amateur boxing trainer. Vetyeka has already produced an Eastern Cape amateur champion from his V12 Boxing Gym.

"I was given the Community Hall last year next to my house in Mdantsane where I train amateur boxers. Some of my fighters had their first fights in May last year and already I have produced an Eastern Cape amateur champion.

"I was also chosen to be part of the coaching staff for the Buffalo City Metro amateur team that participated in the Eastern Cape Games in Mthatha in September. But I was involved with the cadets," he said yesterday.

"We were supposed to go to Limpopo for the SA Games in September but we could not due to financial issues."

Vetyeka, who was born in Duncan Village, north of East London, says he would have won his fourth world title had it not been for the car accident.

"My promoter (Ayanda Matiti) told me that the offer was already on the table," said Vetyeka who is yet to be compensated by the Road Accident Fund.

In 2013, Vetyeka won the IBO featherweight belt from Daud Yordan in April and in December unified it with the WBA Super title when he Indonesian icon Chris John Australia in 2013. Before that sixth round stoppage John had been undefeated after 52 fights. He quit the sport.

The victory saw Vetyeka become the first local fighter to achieve the feat of winning two titles simultaneously, the second being Hekkie Budler.

The accident left Vetyeka with two broken legs. He was operated on but the recovery was not sufficient for him to box again. He beat Filipino Eric Barcelona to win his first world title, the IBO bantamweight, on July 11 2009.

Michael "Pronto" Mokoena has promised to continue where Jacob "Baby Jake" Matlala left off when the pint-sized pugilist won the IBA ...
Sport
2 years ago

If Simpiwe Konkco surprises world strawweight champion Chayaphon Moonsri in Thailand on Friday afternoon‚ he’ll be only the third South African to ...
Sport
2 years ago
Next Article