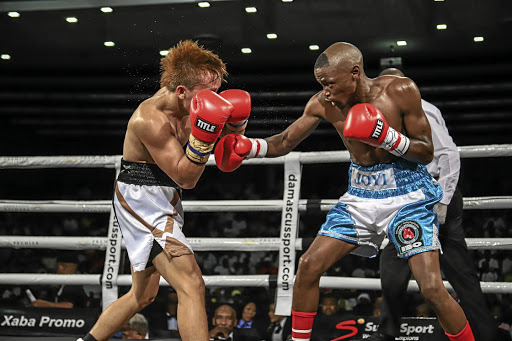 Nkosinathi Joyi taught Joey Canoy of the Philippines a thing or two in boxing in their 12-rounder for the IBO belt - a fight Joyi won on points on Monday.
Image: Nick Lourens

A supposed corpse was very much alive on Monday afternoon when 36-year-old boxing veteran Nkosinathi Joyi revved up Joey Canoy over 12 rounds to eventually defeat him on points for the vacant IBO mini flyweight belt at East London's ICC Hotel.

Joyi was once SA's boxing giant until the left-handed former Eastern Cape, SA, IBO and IBF mini flyweight champion from Mdantsane hit his all-time low in 2015.

He was declared a has-been, especially after losing to then IBO holder Simphiwe Konkco in 2016.

But Joyi dusted himself up to win the WBO Africa junior flyweight belt, and all credit to promoter Ayanda Matiti for giving Joyi a lifeline.

It was also Matiti who staged the vacant IBO mini flyweight title fight which Joyi won on Monday.

Canoy, 26, of the Philippines, came with a reputation, especially after looking to be en route to dethrone Konkco in their fight.

Konkco was graciously saved by a cut on his forehead which forced the bout to be stopped in round four. It was declared a no-contest. But Konkco was later stripped of that belt before he went to Thailand where he lost to WBC holder Wanheng Menayothin in October.

Joyi taught Canoy a thing or two and the young man will definitely be a far better boxer going forward. Joyi won the belt he forfeited in 2015 due to fighting for the IBF belt, a superior championship Joyi won against Canoy's countryman Florante Condes.

Matiti a top dog in boxing promotion
Sport
2 years ago

Moruti Mthalane will have SA judge in world title defence

SA ring official Neville Hotz will be one of the three judges when Moruti Mthalane makes the second defence of his IBF flyweight crown in Japan on ...
Sport
2 years ago