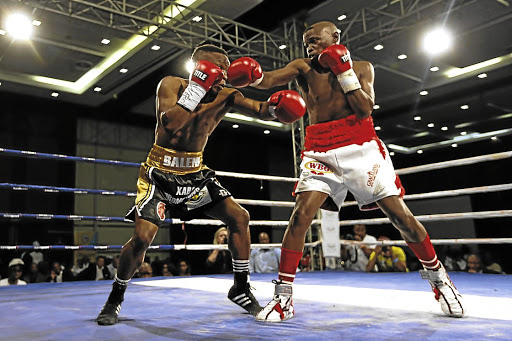 The sleeping giant of the mini- flyweight division, Nkosinathi "Mabere" Joyi, is very much awake.

This is thanks to promoter Ayanda Matiti who has given the one-time knockout artist a lifeline when his obituary as a fighter had already been written.

Joyi will attempt to win the IBO strap he held from 2006 until 2009. He lost it when he stepped inside the ring to face Florante Condes for the IBF belt.

Joyi, who won the IBF belt and lost it in 2012, will take on Joey Canoy of the Philippines for the belt that was forfeited by Simpiwe Konkco before he flew out to Thailand where he lost to WBC holder Wanheng Menayothin in October.

Moruti Mthalane will have SA judge in world title defence

SA ring official Neville Hotz will be one of the three judges when Moruti Mthalane makes the second defence of his IBF flyweight crown in Japan on ...
Sport
3 years ago

The battle of the lefties will form part of Matiti's seven-title thriller at East London's ICC Hall on December 16.

Canoy will be remembered for having then IBO holder Konkco in all sorts of trouble before their fight in December last year was called off in round five due to a bad cut Konkco sustained after an accidental clash of heads.

Joyi, 36, was once ranked by BoxRec and The Ring Magazine as the number one boxer in the mini-flyweight division until the former IBO and IBF holder hit rock bottom, especially after losing the IBF belt in 2012.

Joyi puts title on the line against rookie