He beat me fair and square - Budler 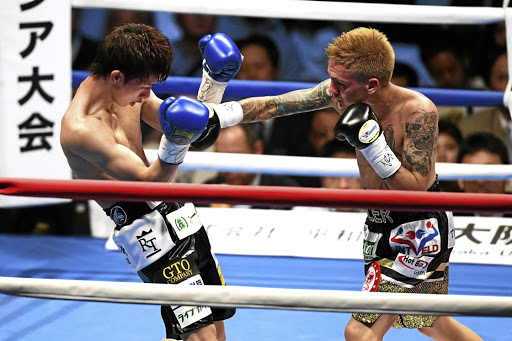 Hekkie Budler connects his right on Ryoichi Taguchi of Japan in a previous fight. / Getty Images / The Asahi Shimbun

Dethroned WBA Super and the Ring Magazine belts holder Hekkie "Hexecutioner" Budler is an honest and genuine guy who would not allow public perception to influence his state of mind.

Actually that is what has made this tiny 30-year-old boxer the gentle giant of local boxing.

He gave credit to Japan's Hiro Kyoguchi, who dethroned him via a 10th-round stoppage in Hong Kong on December 31.

"He was just better than me. I don't want to make excuses. He beat me fair and square," said Budler yesterday.

Asked if he agreed with trainer Colin Nathan's decision to stop the fight, Budler said: "If Colin felt he had to stop it, then there is no problem because I trust his judgment. I put my life in his hands every time I step inside the ring."

Hekkie Budler relinquished his WBA junior-flyweight crown as he quit after the 10th round of his first defence against Hiroto Kyoguchi in Macau on ...
Sport
3 years ago

Kyoguchi, a former IBF minimum weight champion, remains undefeated in 12 fights. On paper, the fight looked like a mismatch that should not have been sanctioned due to the two boxers' CVs.

Budler boasts 32 wins in 35 fights while Kyoguchi had only 11 wins from as many fights.

Joyi is one of Budler's victims.

It came as no shock when accomplished trainer Nathan intervened for Budler against Kyoguchi in the 10th round. That was Budler's first stoppage loss since he fought his first professional boxing match under the same trainer in 2007.

But Budler still regards Juanito Rubillar as being his toughest opponent to date.

"He had about 80 fights when we fought and I had just fought 16 times as a professional," said Budler. "He was not powerful in terms of punching power but instead strong and very clever."

Budler said Kyoguchi does not hit hard but physically he was very strong.

Budler promised to bounce back with a bang.