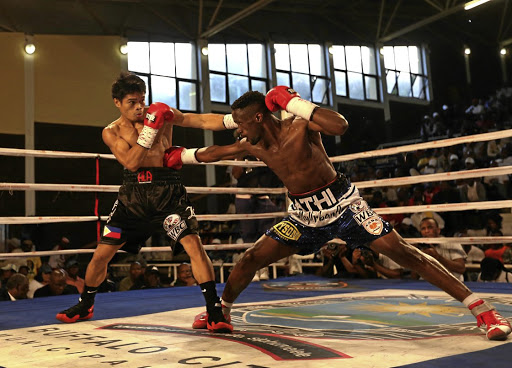 Athi Dumezweni defeated Jonas Sultan at the Orient Theatre this past weekend./Nick Lourens

The boxer from Mthatha won the title on unanimous points decision after outboxing equally competent Jonas Sultan of the Philippines at Orient Theatre in East London.

Dumezweni, who relinquished the SA title prior to facing Sultan in Xaba Promotions and Events tournament, dropped the tough-as-nails visitor twice en-route to a deserved points win.

"I was very happy with Dumezweni's performance against Sultan who is rated No9 in the world," said Durandt yesterday.

Based on his performance on Sunday, Dumezweni should be considered as one of SA's top fighters.

"He is now rated No9 in the world by BoxRec.Com and we are waiting for the WBC to rate him higher in the division."

Regarding Jackson "M3" Chauke, who stopped Thabang "Pretty Boy" Ramagole in the ninth round for the then vacant SA flyweight belt also on Sunday, Durandt revealed what was their plan.

"I warned Jackson going into the fight that Thabang was going to bring a tough fight, because he also wanted to be the champion."

Ramagole, whose career is guided by his father and trainer Lucky Ramagole, dropped Chauke in the first round. That was Chauke's first visit to the slumberland ever and that, includes his amateur career which saw him represent SA at the 2008 Beijing Olympics.

The title Chauke and Ramagole fought for, remained vacant when Boxing SA stripped off Thembelani Nxoshe after he failed a dope test in February.