Joyi puts title on the line against rookie 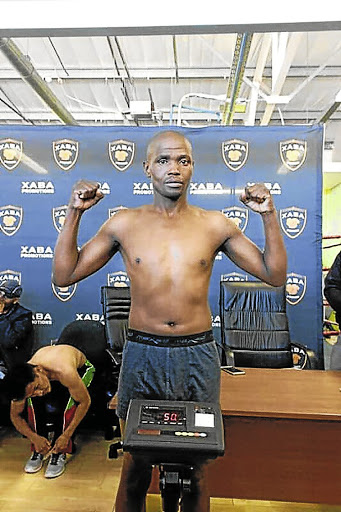 Nkosinathi Joyi getting ready for do-or-die clash against Ntlantla Tyirha at the Orient Theatre, East London, on Sunday.
Image: SUPPLIED

If Nkosinathi Joyi, Ntlantla Tyirha and Yanga Siqgibo are able to transform into action their volley of verbal barbs, then fight fans will witness what can best be termed as a thrill-a-minute boxing tournament on Sunday at Orient Theatre.

These boxers will feature prominently in Xaba Promotions and Events' international event to mark the 25th anniversary and fourth annual celebration of freedom and democracy in SA.

Joyi is a battle-marked veteran whose WBO Africa bantamweight belt will be at stake against Tyirha, a young rookie.

Tyirha is an 18-year-old newcomer who won the SA title in his fourth professional fight when he dethroned veteran Bongani Silila in December.

Sigqibo, 24, is the former South African bantamweight champion. He has 12 wins in 14 fights.

Joyi, the left hander who paid tribute to promoter Ayanda Matiti for giving him the opportunity to defend his title he won in December against Mpho Seforo, said: "The time for this fight has come. I urge people to come to Orient Theatre not only to witness a good tournament, but also to come and support the sport.

"I don't like to say much because a lot happens during the fight but in short, I don't want the fight to go 12 rounds. I will beat this guy with a knockout."

Joyi has done the short route 19 times before.

Zolani "Last Born" Tete has pulled out of the bantamweight World Boxing Super Series due to a shoulder injury - his manager Mlandeli Tengimfene ...
Sport
2 years ago

Tyirha responded: "We know Joyi too well. He comes forward most of the time and our strategy is to box him and avoid getting hit. My intention is to be a world champion."

That journey begins on Sunday.

Tyirha is described as the reincarnation of the late former SA non-white bantamweight champion Mzukisi "Wonder Boy" Skweyiya whose antics set the boxing scene on fire in the 1970s.

Sigqibo, who will put his WBO Intercontinental title on line against Antonio Guzman - the 21-year-old Venezuelan who has 20 wins in 21 fights, said: "I train about three to four hours a day. I am not a fighter but a boxer who fights from the outside not because I am a coward. It is my strategy but if I must take the fight to the opponent, I also do not have a problem."

The tournament will be headlined by Anthenkosi Dumezweni in his quest to win an international belt. The former SA junior bantamweight holder will oppose Jonas Sultan from the Philippines in a 12 rounder for the vacant WBC silver title.

Jackson Chauke and Thabang Ramagole will face each other for the vacant SA junior flyweight strap.