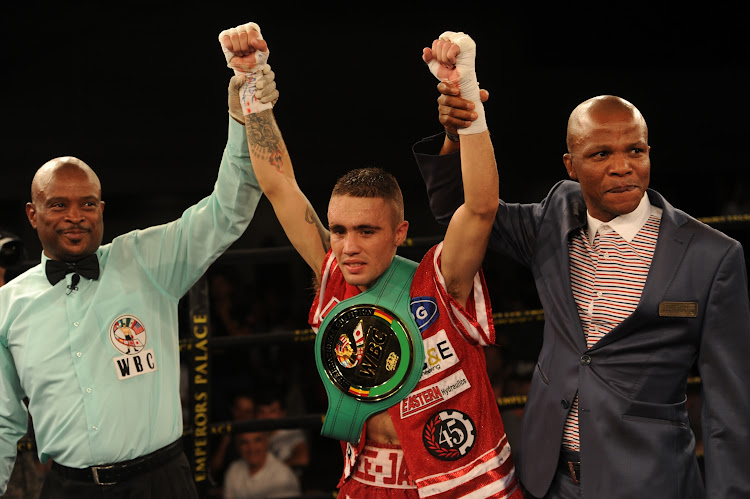 Deejay Kriel captured the IBF strawweight crown in Los Angeles on Saturday night in a fashion so dramatic it might have been scripted in nearby Hollywood.

Kriel was behind by seven points on the cards of two judges going into the final 12th round at the Microsoft Theatre — to win he had no choice but to stop unbeaten champion Carlos Licona.

And he did exactly that.

Kriel‚ who dropped out of high school on the East Rand to follow his dream of becoming a boxer‚ dropped the American three times to claim victory with 44 seconds of the fight remaining.

The pretty impressive for a pugilist who went into the bout with a knockout ratio of less than 50%.

Kriel‚ who relocated to Las Vegas less than seven months ago‚ scored the first knockdown with an overhand right‚ and then attacked his opponent like a man possessed to drop him twice more to secure the triumph.

Licona didn’t get up after the last knockdown and was taken to hospital.

None of Kriel’s family or friends could make the trip to be ringside‚ but Chris van Heerden‚ another transplanted SA boxer‚ came to cheer him on.

“I was happy with that — one South African [in the crowd]‚” Kriel said with a laugh.

“To have this victory is unbelievable‚” added Kriel‚ who has been living on his own while training with coach Kenny Adams.

“I was in so much tears. This is the happiest day of my life.”

Kriel said Licona had surprised them by fighting far better than he had in the bouts they had studied‚ and that he himself had struggled to get going.

“From round one to round 10 I didn’t know where I was‚” Kriel admitted. “I was lethargic‚ I was thinking too much. You know‚ the big stage got to me.

“I felt I started coming back after round eight‚ nine. I felt ‘okay‚ I’m here‚ I’ve got to do this’.”

In the minute-long break before the final round‚ his cornermen told him what he needed to do.

“They said‚ ‘you’ve got to knock him out‚ you don’t have a choice’. I dug deep‚ I came out‚ I threw an overhand right‚ I caught him on his head and he went down.”

Kriel said he wasn’t surprised because he had hurt Licona a few rounds earlier.

He’s also the first SA fighter since Dingaan Thobela to win a world crown by last-round stoppage when needing a knockout.

Thobela beat Englishman Glenn Catley to win the WBC super-middleweight title in 2000 — when Kriel was just five years old — but Thobela had the advantage of fighting in front of home fans at Carnival City.

Kriel knows that defending the belt is a different ball game. “It’s been an incredible journey for me‚ but it’s just started. It's just started. I’ve got to keep working hard.”

Former ace boxing trainer-manager Mzimasi Mnguni is back St Dominic’s Hospital in East London‚ where he was admitted two weeks ago.
Sport
2 years ago