Plans afoot to get Tete back in ring 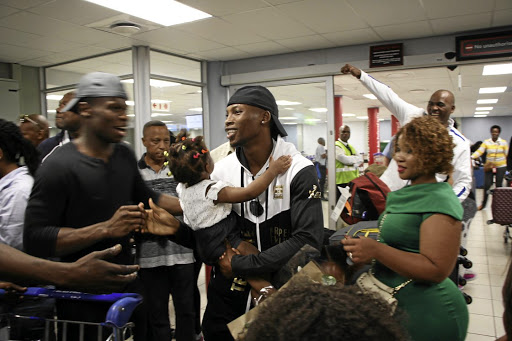 Zolani Tete is welcomed by fans and family in East London on his return from Birmingham, UK./SIBULISO DUBA

The MRI scan produces detailed pictures of the inside of a human body and it may be used to diagnose or monitor treatment for a variety of conditions.

"That will just be a precautionary measure," said Tengimfene, who revealed that four ringside doctors in Birmingham checked his charge after losing the WBO bantamweight belt in the UK.

"They all gave him a thumbs up, but it makes no harm to take him to an MRI scan here at home," he said.

The stoppage in Birmingham, where Tete lost in the fourth defence of his
belt, was his second in an illustrious
professional career which began in 2006.

The 31-year-old hard-hitting left-hander had achieved 12 wins and seven KOs before losing to Casimero.

Tengimfene said his boxer's UK promoter Frank Warren told him after the fight that he was going to make a strong representation for Tete during the WBO convention which started on Monday in Japan.

"The master plan is to have him back in action in March so that he remains up there," said Tengimfene.

Warren is a 67-year-old shrewd businessman who can spin things in Tete's favour, especially after Casimero's voluntary defence such as fighting for a condition that the winner in Casimero's mandatory defence faces Tete.

Assistant trainer to Loyiso Mtya, Andile Mofu, said they tested Tete in the camp in various aspects of the sport and he outperformed himself.

"Going forward, you say here is the computer in front of me, re-programme it and do the work," said the president of South African National Amateur Boxing Organisation, who said he was bringing the scientific support to Tete.

The deposed champion can only rebuild himself and hope for redemption on the side of what looks like pending unification of the bantamweight division where Japanese Naoya Inoue holds the IBF and WBA, while France based Moroccan Nordine Oubaali is the WBC champion.