Shock as Tete loses world title by knockout: 'We don't know what happened' 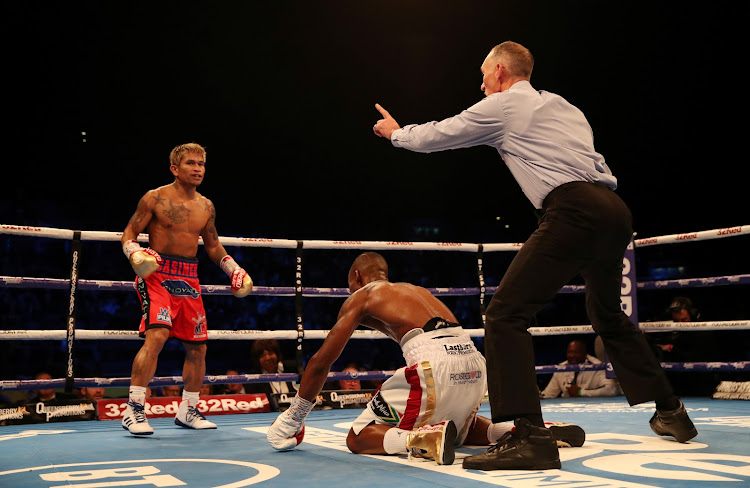 Zolani Tete on the canvass after being knocked out by John Reil Casimero for WBO World Bantamweight Title at Arena Birmingham, on November 30, 2019.
Image: Reuters/Peter Cziborra

Zolani Tete's team was still dumbfounded after his shocking stoppage loss to Johnriel Casimero at Arena Birmingham in England on Saturday.

Entering the fight as a 3: 1 favourite‚ Tete was bundled to the canvas three times in the third round to surrender his WBO world bantamweight crown in what has been described as a huge upset by international boxing publications.

After his defeat he was rushed to hospital for observation but was later discharged.

“We do not know what happened‚” said his crestfallen manager Mla Tengimfene.

“This is still like a bad dream to us but we congratulate Casimero for the win.”

“The good news is that Zolani is back in his hotel room after he was taken to hospital as a precaution.”

Tete, who had not fought for 13 months, started well boxing behind his vaunted right jab while Casimero bid his time with occasional bursts.

The fight followed the same pattern until the Filipino lunged in and landed a right hand to the temple that discombobulated Tete as he dropped to the canvas.

Tete took the count but even though he managed to make it to his feet‚ he was still badly dazed.

Casimero pounced on him landing a couple of right hands as Tete covered up on the ropes.

One such punch floored Tete face first as he attempted to run away from the Filipino onslaught.

Again he beat the count but the writing was already on the wall as the relentless Casimero‚ smelling a quick and easy win‚ charged at him.

After a barrage of blows many which did not connect‚ the referee waved the fight over to snap Tete's 12 bouts winning streak and end his reign as a world champion.

The loss was a double-edged sword for Tete as it saw his world unification against Japanese Naoya Inoue go up in smoke.

There were concerns that Tete was overlooking Casimero as his pre-fight interviews focussed on Inoue instead of the dangerous Casimero who had won all four of last bouts by knockouts .

The Filipino, who lost to Tete's compatriot Moruti Mthalane‚ had enjoyed a career resurgence going to the fight.

The win marked his third title victory in a third weight division having reigned as the IBF junior flyweight and flyweight champion.

Backed by Filipino great Manny Pacquiao whose Manny Pacquiao Promotions (MPP) wanted to organise the fight in Philippines only to lose the purse bids auction to Tete's English promoter Frank Warren‚ Casimero described the win as the biggest of his career.

“Give me Inoue now‚” the 30-year-old Filipino screamed at ringside after the win.

For Tete it is back to the drawing board although at 31 years old time is not on his side especially as he is prone to injuries.

Tengimfene could not say what the future holds for the left handed champion.

Tete is expected to arrive in the country on Monday.