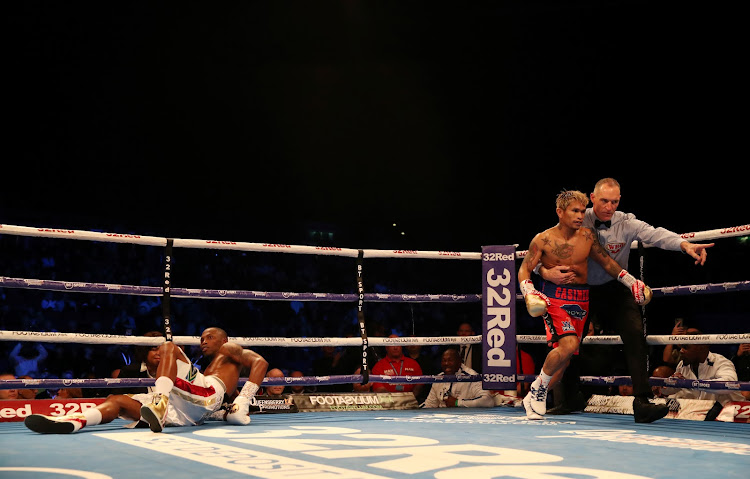 Zolani Tete struggles to get back on his feet after being plummetted by John Reil Casimero.
Image: Reuters/Peter Cziborra

Tete‚ 31‚ had edged the opening two rounds with minimal effort‚ but the moment Casimero got inside‚ sliding past the southpaw’s right jab‚ he landed two right hands to the temple.

The South African went down and he never recovered.

Casimero swarmed all over him putting down a second occasion and soon after that landing a clean left to the jaw that convinced the referee to wave it over.

Tete had been inactive since October last year‚ pulling out of a unification bout against Nonito Donaire‚ another Filipino‚ in April after injuring his right shoulder.

Casimero‚ on the other hand‚ had fought three times in that period‚ winning all inside the distance.

He had also lifted the WBO’s interim title‚ a belt given to glorified mandatory challengers‚ and the word was that he’d been training like a demon in Las Vegas.

Now he’s the champ‚ owning a title in his third weight division‚ having held belts at junior-flyweight and flyweight.

Tete and Casimero had had one opponent in common‚ Mthalane‚ who put them both away in five rounds in the space of seven months in 2010 and 2011.

It’s little surprise that Casimero’s promoter is countryman and boxing legend Manny Pacquiao‚ who ended the reign of then IBF junior-featherweight champion Lehlohonolo Ledwaba in 2001.

Before the fight Tete had spoken about taking on unified bantamweight champion Naoya “Monster” Inoue of Japan‚ but now Casimero has adopted that dream.

It’s likely to be a long road back for Tete.

Mthalane‚ who became champion in 2009‚ is scheduled to defend his IBF flyweight crown against Japan’s Akira Yaegashi in Yokohama just before Christmas.

World heavyweight champion Andy Ruiz Jr said he was the more skilled fighter and Briton Anthony Joshua will have to rethink his strategy in their ...
Sport
2 years ago
Next Article