Tete vows: I'll be back 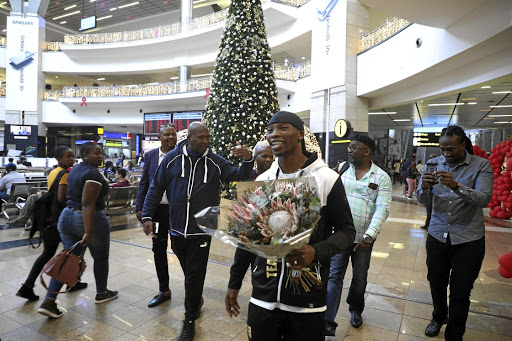 Zolani Tete, with flowers, arrives with his management team led by trainer Loyiso Mtya, left, at the OR Tambo International yesterday after losing his WBO bantamweight crown to John Riel Casimero from Philippines at the weekend.
Image: Thulani Mbele

Zolani "Last Born" Tete has dismissed rumours of having weight problems ahead of his third round stoppage by John Riel Casimero at the weekend.

The Filipino ended Tete's reign as the WBO bantamweight champion in the UK on Saturday.

"I find that rumour very unfortunate because I was already within the weight
limit even before we jetted off a week before the fight," said Tete on his arrival at OR
Tambo International Airport yesterday.

"I didn't train on the first day we arrived and that should tell you a lot. I even had two
yoghurts three hours before the weigh-in, so, really I don't know where this weight problem thing comes from."

The former WBF flyweight and IBF junior bantamweight champion acknowledged that the stoppage loss to Casimero was bad, but certainly not his worst.

"The guy was just lucky," said 31-year-old Tete whose first stoppage was to Moruti Mthalane in 2010.

"The loss to Casimero motivates me to bounce back even stronger than before. Look, I ducked too low and also went straight to where he had thrown the punch. He caught me and congratulations to him, but I doubt that he aimed that punch. I think he was surprised. I was beginning to get my rhythm."

Tete had not fought for over a year due to an injury on his shoulder.

East London star Zolani Tete lost his WBO bantamweight crown in Birmingham‚ England‚ on Saturday night‚ getting stopped in the third round by ...
Sport
2 years ago

"I felt the long layoff in the first round, but everything was coming nice together in the second round. Even my corner men (Loyiso Mtya, Andile Mofu and Makazole Tete) said things that made me feel good about myself after round two. Look, we had a plan and we were going to win until that very moment."

Tete also agreed that the inexperience after being dropped played its part.

"The first thing that I did not do was to look at my corner men when I was down so I could go with their count. That was because my eye had been blurred by Casimero's blow.

"Also, I wanted to get up and fight, but I was still dazed and you would have noticed that I went down on my own for the second knockdown. Listen, I will bounce back."

Tete warned that he doesn't want boxing to retire him.

"I mean it when I say I can retire now because I have managed to make good money. I have a family and a life to enjoy," said the boxer who earned R3.2m on Saturday.