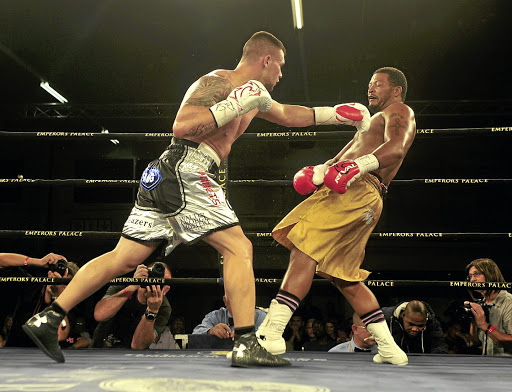 Imms Moses has warned the South African fight public about what is in store for them this weekend.

He manages the moribund careers of cruiserweight boxers Vikapita "Beast Master" Meroro and Wilberforce "Black Mamba" Shihepo. The two veterans from Namibia are at a crossroad in their careers that began in 2005 and 2003, respectively.

Meroro will face 25-year-old rising star Akani "Prime" Phuzi, who is undefeated in nine fights, in a 10-rounder in Randburg on Sunday. That is where Charing Cross of promoter Marianne Toweel du Trevou and Sandile Xaka's Supreme Boxing Promotions will stage the six-bout card dubbed Young Gladiators.

Meroro next up for WBA champ
Sport
2 years ago

At Sun Arena, Time Square in Pretoria, also on Sunday, Shihepo will exchange leather with Thabiso "The Rock" Mchunu in another non-title fight over 10 rounds.

Their fight will be on the undercard of the must-see SA and WBA Pan African middleweight showdown between holder Walter Dlamini and Nkululeko "Bull Dog" Mhlongo. The tournament will be staged by 5th Elements of promoter Janie Hebler.

Shihepo, 36, was in the country in July and lost to Phuzi. Moses said: "Vikapita is in great shape, he'll give Phuzi a good fight and we will be victorious."

He added: "Shihepo will destroy Thabiso. I know Thabiso from the amateurs but I think Shihepo has a big tank."

But it is highly unlikely that Meroro will defeat Phuzi. Meroro has lost hunger, drive and ambition. Shihepo could still bring the best out of Mchunu because Shihepo is still tough and durable.

Meanwhile, Smangele "Smash" Hadebe intends to shine in what will be the first female bout against locals to be televised by SuperSport when she welcomes Thema Zuma from KwaZulu-Natal in an eight-rounder.

Some careers may be headed for the scrapheap after this weekend.

Woefully out of shape Namibian boxer Vikapita Meroro will not get the purse money he signed for with Golden Gloves to face Kevin "KO Kid" Lerena at ...
Sport
4 years ago

The ball is in your court, Berman tells Budler and Lerena

Hekkie "Hexecutioner" Budler and Kevin "KO Kid" Lerena must be fully prepared in their fights tomorrow evening to guarantee themselves bright future ...
Sport
4 years ago
Next Article