Mchunu must perform for the cameras 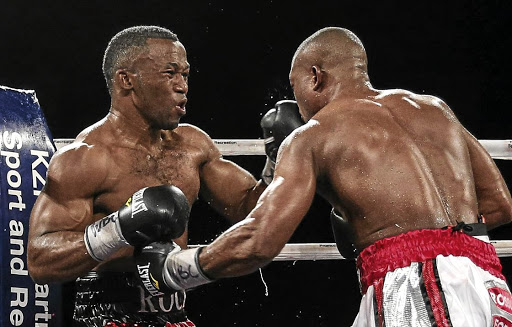 A rematch between Thabiso 'The Rock' Mchunu, left, and Ilunga 'Junior' Makabu would be something to watch, says the writer. / Nick Lourens
Image: Nick Lourens

Thabiso "The Rock" Mchunu must be
explosive and provide excitement from the word go in his 10-rounder with Namibian Wilberforce "Black Mamba" Shihepo at Time Square in Pretoria on Sunday. That would make it easier for promoters to get the backing of TV broadcasters for his fights going forward.

Word doing the rounds is that female promoter Janie Hebler of 5th Elements lost hair significantly trying to convince broadcasters to buy into this fight.

It is alleged that SuperSport was excited with the proposed third instalment between Mchunu and Thomas "Tommy Gun" Oosthuizen. Tommy Gun, who won the first of their two bouts, was willing to face Mchunu but the SA and ABU cruiserweight champion refused.

Mchunu saw no value in the third fight though it would have settled the score between the two left-handers.

Hebler moved swiftly to get 36-year-old Shihepo as the new opponent for Mchunu. SuperSport is still going to broadcast it, but it took a lot of convincing for that to happen.

'Fuzile is no alcoholic nor a womaniser'

The biggest worry for broadcasters, it is alleged, is that Mchunu is not exciting as a fighter. He has the looks, talent and physique, but he is always in a cocoon.

There was so much excitement when he won the SA title in his fourth fight and victory for the NABF belt in the US further confirmed a brighter future ahead of him, but his world crumbled when he was stopped by Ilunga Makabu for the rights to challenge for the WBC belt.

The 31-year-old Mchunu, who is trained by Sean Smith, has been blowing hot and cold since that loss. He must come out guns blazing and reassure his backers and broadcasters that he still has what it takes to be a draw card.

His fight against Shihepo will deputise for what promises to be war of attrition between SA and WBA Pan African middleweight holder Walter "Black Mamba" Dlamini and Nkululeko "Bull Dog" Mhlongo. Action will begin at 2pm.