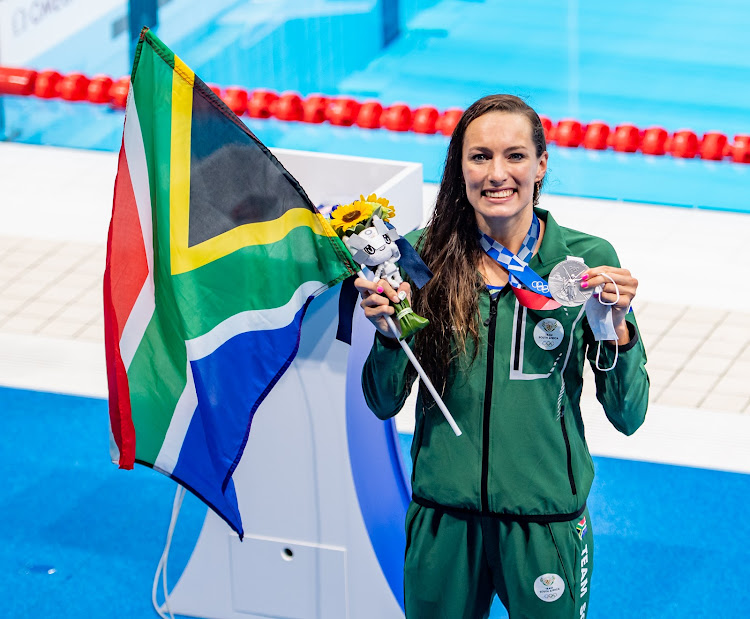 Swimmer Tatjana Schoenmaker kicked off an all-women two-medal haul for Team SA on Tuesday morning, taking silver in the women’s 100m breaststroke at the Tokyo Olympics.

Just more than two hours later unheralded surfer Bianca Buitendag slayed No.2 seed Caroline Marks of the US to reach the final where she will fight for gold later in the day. The George-based South African, seeded 17th in the field of 20, earlier downed Portugal’s Yolanda Hopkins.

Schoenmaker touched in 1min 05.22sec — her slowest time in her three swims at these Games — to finish behind American teenager Lydia Jacoby in 1:04.95.

Defending champion Lilly King of the US was third in 1:05.54.

The South African is well primed to win two medals at this showpiece, going into the 200m breaststroke heats on Wednesday as the favourite.

But had Schoenmaker replicated the 1:04.82 Olympic record she had clocked in the heats on Sunday, she would have taken gold on Tuesday morning. Her 1:05.07 on Monday was the fastest time of the semifinals.

The SA women's hockey team is the lowest-ranked team in Group A at the Tokyo Olympics, and they have a mammoth task to qualify for the quarterfinals ...
Sport
9 months ago

She was also the first to turn. “Coming back I was a little more tired, especially at the end, I was dying a little,” said Schoenmaker, adding she could see King on the one side, but not Jacoby on the other.

“At the end I saw she was ahead and I just knew like I’m so [tired] I can’t do this but I know I gave my best. I literally  couldn’t give anything more.

“I‘m very happy. I was not ranked in medal position so walking out with a medal already is amazing,” said Schoenmaker, who went into this event seeded fourth. “I swam a [personal best] in the heats so I was already happy. I could have left it at that.”

Schoenmaker is the first SA woman to win a Games swimming medal since Penny Heyns at Sydney 2000.

She won’t be able to match her compatriot’s feat from Atlanta 1996 of being the only woman to win the breaststroke double at an Olympics.

But making the podium has ended a long drought for SA women’s swimming this millennium. No women qualified for Athens 2004 and Rio 2016 — Schoenmaker missed out five years ago by one-hundredth of a second.

Schoenmaker said her Olympic record in the heats had taken her by surprise. “I never expected that as a first swim, I just really felt comfortable.

“Obviously it was getting tougher each one, and I actually did think I would feel better this morning, but I was a bit tired, so I think the racing back to back and the way it’s laid out is very different, but we’re all experiencing the same so it was … who was the strongest at that moment in time.”

Schoenmaker said she hoped her success might give hope to South Africans back home. “I really hope this brings a little bit of hope for South Africa, we’re obviously going through a tough time at the moment so if that just shows us there is hope in South Africa …

“We know that sport unites countries. We’ve seen it with the Rugby World Cup so hopefully the Olympics does the same.”

Veteran Chad Le Clos won his 200m butterfly semifinal in 1:55.06 to go into Wednesday’s final with the third-fastest time, after nearly missing out with a slow swim in the heats.

“I got the springbok here on my suit, it gave me a bit of motivation, Tatjana gave me some motivation,” said Le Clos, SA’s most decorated Olympian with four medals.

“It’s Olympic Games, I maybe took it for granted yesterday, came n a little bit sloppy, I nearly paid for it, I guess I was lucky.

“Today I made sure I was in the final. Tough race, tough competitors of course … kill or be killed.”

World record-holder Milak Kristof of Hungary won the other semifinal in 1:52.22, ahead of Brazilian Leonardo de Deus in 1:54.97.

The slowest of the eight qualifiers was Japan’s Tomoru Honda in 1:55.31.

Nompumelelo Mjadu, Sipho Lushaba, Mbali Zulu and Sandile Sikhakhane remain unshaken and coolheaded despite widespread criticism of their design of ...
Entertainment
9 months ago

Triathlete Henri Schoeman is cautioning about expectations for his race at the Tokyo Olympic Games on Monday‚ saying he’s unsure if his body will ...
Sport
9 months ago

Team SA suffered a big blow on Saturday’s opening session of the Tokyo Olympics when their fancied men’s four rowers sauntered into last place of ...
Sport
9 months ago
Next Article