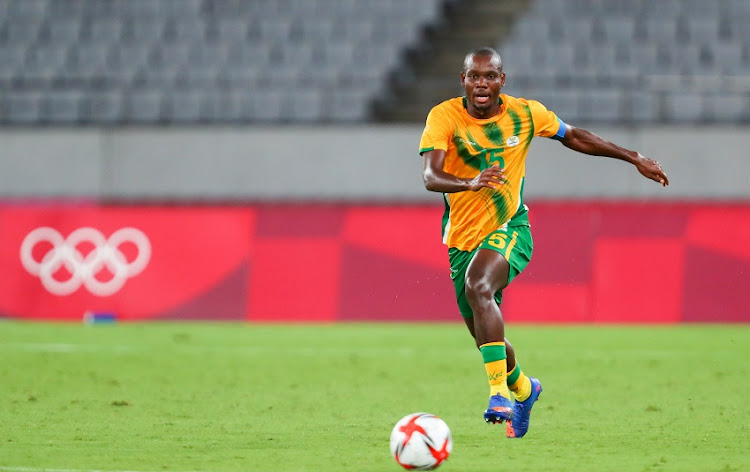 South Africa’s men’s football captain at the Tokyo 2020 Olympics‚ Tercious Malepe‚ says they want to do well to put smiles on the faces of their countrymen following recent looting in some major cities in the country.

The much-depleted South Africans started the tournament with a narrow 1-0 loss to hosts Japan and they take on France in the second match of Group A at the Saitama Stadium on Sunday looking to enhance their chances of progressing to the next round.

France‚ who have overage players like Andre-Pierre Gignac and Florian Thauvin in their squad‚ are also looking to get their campaign back on track after they were thumped 4-1 by Mexico on Thursday.

“That’s something we’ve always had in our minds as a team‚ to bring happiness to the people back home. It’s very important to us as players‚” Malepe said.

“The people need something right now and‚ to be honest‚ we haven’t done as well in these big tournaments in the past as everyone wanted. I believe we can change that here‚ and I think too that it will help bring some peace and belief to everyone in South Africa.”

The 24-year-old Malepe‚ the only player in the current squad with prior experience of Olympic football‚ is the first South African footballer in history to play at consecutive editions of this global event.

He was part of the team that failed to get out of the group stages at the Rio Olympics in 2016.

“When I tell the young guys here how important this tournament is‚ and how special it is for us to be here‚ they understand that I know what I’m talking about‚” the centreback based at Ukraine’s FK Minaj said.

“I’ve been in their position – I was the youngest player in our squad in 2016 – and I’ve been telling them that the atmosphere of this event‚ the surroundings‚ the level of play‚ is something else.”

Malepe and his teammates experienced that from the start in Rio‚ going up against the hosts and eventual winners in front of a partisan and 70‚000-strong crowd in Brasilia.

And while Neymar ended those Games clutching a historic gold medal‚ the South Africa defender remembers the Seleção’s star man enduring a tough afternoon in that goalless opening encounter.

“What Neymar does on the pitch is amazing‚ just beautiful to watch‚” he said.

“But I was on the bench that day and I remember watching how our defenders – guys like Abbubaker Mobara – played against him. Cool‚ calm‚ collected‚ it was amazing.

“ … It showed me what you can achieve‚ even against great players and teams‚ if you believe in yourself.”

SA’s Tokyo build-up was hit by tournaments being cancelled due to Covid-19. They lost three and drew one of the four games against Egypt and Saudi Arabia eked out as warm-ups in the past year.

Arriving in Tokyo SA had two players test positive for Covid-19‚ and the squad had to isolate for two days‚ only resuming training on Monday. In all they travelled seven days without training from their camp in Mpumalanga.

Reeve Frosler was rushed straight into the XI against Japan despite arriving late‚ having played in Kaizer Chiefs’ Caf Champions League final defeat to Al Ahly in Morocco on Saturday night.

Given France’s poor start‚ coach David Notoane would seem likely to opt for a more attacking approach in SA’s second match‚ where his team have a chance to rescue something from a competition that was always going to present an uphill battle.