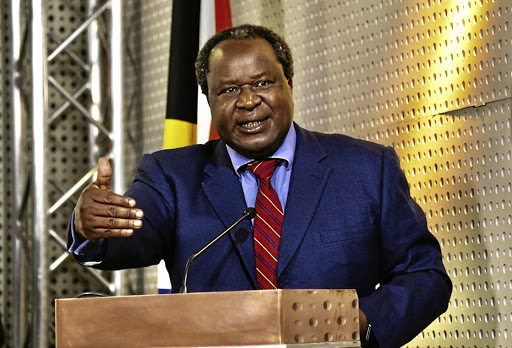 Finance minister Tito Mboweni has stood before parliament to announce that SA has now reached the point where thieves from the ANC have stolen everything.
Image: Siyabulela Duda/ GCIS

People often ascribe all manner of sayings to the Chinese, and we have no way of knowing if it is true or not. We are told the Chinese say you can move in and commit murder when a house is on fire.

A practical example is what President Xi Jinping is doing in Hong Kong. As the people of the world scramble to save their lives from Covid-19, Xi is busy arresting people and imposing a dictatorship on Hong Kong. He knows that while the world is on fire, there is no time to focus on human rights and such niceties.

The advice of the alleged Chinese saying is also being taken to heart here in SA. As the Gauteng government prepares millions of graves for people who will not die, something more long term is being ignored.

While the masses wallow in the illusion of great things to come, politicians from the liberation (now governing) party move into government positions where they begin to take advantage of the massive opportunities to enrich themselves. After about 10 years, corruption scandals are enough in the public domain to make the masses realise they were wrong to associate their leaders with angels.

The second decade of freedom is very noisy, characterised by the emergence of critical voices in society that try hard to awaken the masses to the reality that their so-called leaders are thieves.

By the time the masses wake up, the thieves are already rich, and the whole country is a mess - no service delivery, no economic growth, no jobs. Such is the time when the thieves run to the IMF and the World bank for loans, which are also looted by the same thieves.

Before being face to face with death in the age of the coronavirus pandemic, we used to take lips for granted.
Opinion
1 year ago

A few weeks back, Tito Mboweni stood before parliament to announce that SA has now reached the point where thieves from the ANC have stolen everything, and have now agreed to run to the IMF for loan. The funds will also be stolen by the same thieves.

Because South Africans were so terrified by rising coronavirus numbers, we did not try to make sense of the real meaning of Mboweni's message. What he said is that SA has gone down the same road traversed by a typical post-colonial African state - and is now in despair.

Only a madman still believes the ANC can grow our economy and create jobs. Twenty-six years have now proven beyond doubt that what the ANC knows best is to destroy, not to build institutions. Popo Molefe recently confirmed at the state capture commission that "the movement" is an organised criminal syndicate collecting dirty money from deals by state-owned companies. That is how Eskom became what it is today, a state-owned company looted by comrades.

It's time to to fix the country to mobilise ideas and push for the complete opening up of our electoral system.
Opinion
1 year ago

It is very sad to see the alleged Chinese saying in full swing here, to see ANC thieves announcing that they now intend to loot loans from the IMF, and the public continues to focus on millions of graves that will not be dug.

Instead of being distracted by David Makhura's madness, this is the time when activists who care about the future of our children were supposed to rise and stop the thieves from stealing it. Once the thieves receive and loot loans from the IMF, our children's future will be gone.

Anybody who thinks this is fear-mongering must show us one African country that went to the IMF and recovered from looting by comrades.

Those still fooled by Thuma Mina phantoms must look at Emmerson Mnangagwa in Zimbabwe. He, too, had his own version of Thuma Mina, and things got worse.

The point of committing murder when a house is on fire is that, after Covid-19, people will not know whether we are counting damage from the virus or from ANC thieves.