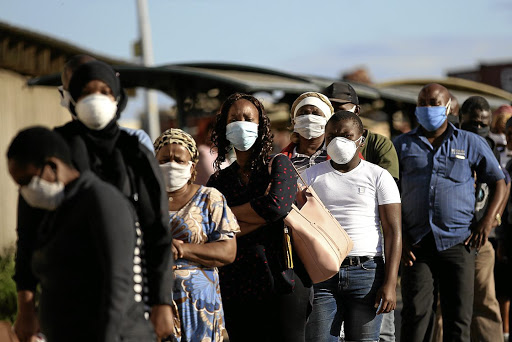 It is compulsory to wear a mask in a public space. In the unfree age of the face mask, can we still use lips to send signals to each other as human beings?
Image: SANDILE NDLOVU

In his book, Dialogue with Death, written in a solitary confinement in a Spanish jail during that country's civil war in 1937, the acclaimed writer Arthur Koestler said he missed a very basic thing: "the immense solace of simple human friendliness."

We humans are strange beings; we never endeavour to discover our full dimensions until we are placed under circumstances that elicit unique responses to the demands of moments.

That is why those who fancy themselves 'civilised' often swear that they would never mutilate other human beings the way they see people mutilated in war zones.

The truth, though, is that most of the so-called civilised people would do exactly what they think they would never do if they were thrown into the hot theatre of war.

In that sense, we humans are not different from parrots. In the open veld, a parrot does not know that it shares something linguistically common with us until it is thrown into a cage and made to pronounce human words.

What option did the president have when relentlessly called out by drinkers and pastors to set the people 'free'.
Opinion
1 year ago

For us human beings, the open veld is freedom under democracy. There is a profound irony to freedom.

The theory of freedom suggests that it enables man to know himself fully, as it ought to widen the space for the exploration and fulfilment of the self.

The reality is that, instead of manifesting what its theory posits, freedom reveals an intrinsic suppressive element. A free agent is free to suppress (or ignore) that which he does not want to explore, even if such an exploration would facilitate a fuller grasp of the self.

Before being placed in solitary confinement, for example, Koestler had suppressed the need to explore the critical importance of simple human friendliness.

Only in the unfree circumstances of imprisonment was Koestler enabled to discover something existentially important about his human nature: that his soul was a veritable wreckage in the absence of simple things like a smile by another human being.

Under conditions of freedom, such simple and yet profound discoveries about human nature are left to people we generally dismiss as useless - philosophers.

The philosopher Roberto Mangabeira Unger long discovered that, when starved of sociability, a self runs the risk of madness, but at the same time, a self that is throttled by an overbearing society feels a sense of enslavement.

Men don't need assistant wives and liquids to lubricate throats when they could be at home with wives and kids.
Opinion
2 years ago

Most of us usually brush aside that simple existential quagmire when we are free. When the suppressive element of freedom operates on us, we exercise our freedom to suppress (or ignore) that which we think is not necessary for us to know about ourselves.

Only under conditions of unfreedom is our consciousness awakened to the profound simplicity of the indispensable nourishment of our very own souls.

How many of us, under level 5 of the nationwide lockdown, yearned to see other human beings - even if we did not know them?

How many of us are troubled by the fact that people's mouths are hidden by masks in public spaces nowadays?

The simple and complex phenomenon of falling in love has always involved the impressions made by the totality of the human face.

In the unfree age of the face mask, can we still use lips to send signals to each other as human beings? The answer is indeed obvious. A logical question then follows: is it possible for us to invent new ways of communicating subtleties from the soul without the involvement of lips and other facial features?

Before he was thrown into prison, Koestler used to think that simple things like human friendliness were not worth his attention.

Before our own dialogue with death in the age of the coronavirus, we too used to take lips for granted.