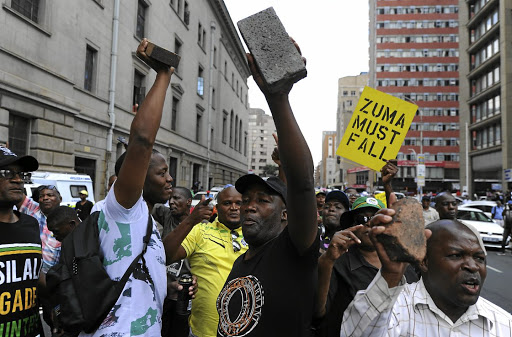 Anti-Zuma protesters sing and chant outside the ANC headquarters at Luthuli House. The ANC did everything in its power to protect former president Jacob Zuma./Felix Dlangamandla/Gallo Images

The judgment handed down by the Constitutional Court last Tuesday has the potential to change SA's politics in a seismic way.

However parliament decides to fashion a new electoral law from 2024 onwards we will see members of parliament (MPs) who represent their constituencies directly, not sent to Cape Town by political bosses.

For the first time since 1994, it will now be possible for an MP to stand up and say, "My constituency in Mtubatuba does support this Bill."

From 2024 onwards an individual who wants to become a member of parliament or provincial legislature will simply stand for election, without the need to join a political party.

Political parties will still be there, but they will be forced to compete with individuals who may be more popular than candidates forwarded by a party.

For the past 26 years the ANC has done nothing to enable individuals to stand for elections at provincial and national levels. Party bosses in Luthuli House have been protective of their power to control public representatives.

What option did the president have when relentlessly called out by drinkers and pastors to set the people 'free'.
Opinion
1 year ago

In other words, the ANC does not want the public to control MPs. This was clear during the Zuma Must Fall campaign. When the public was fed up, the ANC instructed its MPs to defend a thief.

We must therefore expect the ANC to do everything in its power to design a new electoral law that will protect Ace Magashule's power to command things in parliament.

But whatever tricks the ANC may try, they will have to respect the constitutional right of an individual to stand for election. There is no way out of that corner.

If the ANC wants to avoid being seen as the enemy of the people, the party must use its majority in parliament to open up the electoral system by introducing a full constituency-based framework.

Why don't we let people elect representatives from their own communities? If political parties have better candidates, they would be free to field such candidates, and the people shall decide.

Opening up the system must also include the introduction of a presidential system. For nine years, South Africans had to writhe under a thief with a hollow head as their president.

A presidential system would make it possible for any individual to raise his or her hand and say, "I want to be your president." And voters would decide who among the contenders is best.

In a presidential system an elected president does not have to select ministers from parliament; he or she can choose talented and competent men and women from civil society, business or academia.

In our new normal, people will have to learn to do something for themselves, the state will not be in a position to foot the bill.
Opinion
2 years ago

With due respect, the bunch we now call ministers are either tired or downright incompetent. The coronavirus has exposed them. They were forced to stand before the nation and showcase their incompetence. And we were all embarrassed.

Look at the track record of each of those individuals and compare with the deadwood populating our cabinet. A presidential system would make it possible for competence to be sourced outside.

SA is now an economic mess not because we do not have competent people; it is because the ANC, which runs our government, has become the highest concentration of incompetence.

The problem with incompetence is that it is intolerant and scared of competence. The reason why the ANC would not want a presidential system is that such a system would flush out hollow tins like Fikile Mbalula.

The ruling by the ConCourt is indeed a golden opportunity for those who what to fix SA to mobilise ideas and push for the complete opening up of our electoral system.