Cyril would rather let millions starve than cut bloated cabinet 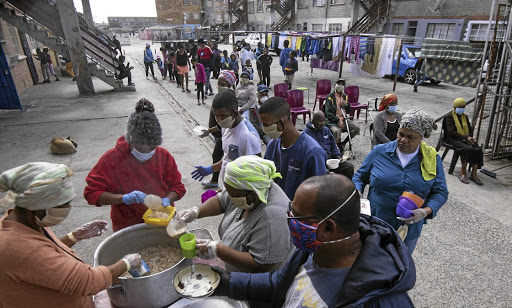 Anwar de Vries and friends feed the elderly and children in Lavender Hill, Cape Town. Hunger is a growing concern in South Africa during the lockdown.
Image: Gallo Images/Brenton Geach

President Cyril Ramaphosa has been praised for his leadership in handling the coronavirus pandemic. Indeed, this is the best thing close to leadership we have experienced.

But the word "leadership" is inappropriate; the right phrase is "crisis management". Ramaphosa is a crisis manager. He can make people believe that things are happening, when the situation is getting worse.

For a while before the coronavirus, he sold a phantom called the "new dawn", a mirage that never existed.

As Ramaphosa went around marketing the "new dawn", more and more South Africans lost their jobs. The economy kept on worsening, while the president's sweet tongue continued to manufacture positive images in the heads of the gullible.

Even if there was no coronavirus, SA would have hit an economic dead-end. The latest downgrade by Moody's has nothing to do with Covid-19; it is all about economic mess under Ramaphosa and a bunch of his fellow ANC incompetents.

Here is a painful truth. Over the past 26 years, they have used state institutions to drain money from the productive (private) sector into the pockets of a few politically connected individuals.

Look at senior ANC leaders; almost all of them are rich - including Ramaphosa himself. Can anyone show us a new factory established by these ANC incompetents? Have you seen one where you live, and what does it produce?

All things have a logical end. Just before the coronavirus, SA had already reached its logical end: the state was broke, and the economy was battling to reach a mere 1% annual growth.

In the social domain, all critical state institutions had already collapsed. Public schools in townships and rural areas had become a sad joke. No politician took their children there.

The reason Ramaphosa moved swiftly to enforce a lockdown had nothing to do with "leadership"; he feared that Covid-19 would convert our already collapsed public hospitals into mega morgues, where millions of sick people would flock to die. The president was right to be scared.

The scariest picture his praise singers say very little about is that of the immediate and medium-term future.

Most of the people who praise his so-called leadership are those who do not live in shacks. They are well-fed commentators who howl from mansions in the suburb.

The millions of South Africans who are tormented by hunger in rural villages, congested townships and squalid shantytowns wonder where is the "leadership" the elite are talking about.

Why are the RET millionaires not joining the fight against Covid-19?

I dare them to help the poor just like the reviled Rupert has done.
Opinion
1 year ago

The future is very scary, and Ramaphosa has no idea what to do about it. After the coronavirus, conservative estimates suggest that unemployment in SA will have climbed to 50%.

Even if we were to accept that only 50% of able-bodied South Africans will be out of work, only an incorrigible sadist would manage to hold back tears. These are not numbers; they are real human beings with mouths and stomachs.

Okay, what must be done? There are things Ramaphosa can do now to save money and reignite the economy.

If Ramaphosa was a leader - not a crisis manager - he would announce an immediate closure of wasteful state-owned companies like SAA. He would immediately hand over the SA Post Office to Postnet, for example, and retain a 10% share.

If he was a leader, Ramaphosa would close more than 70% of SA's diplomatic missions across the world - retaining two in Europe, two in Asia, one in North America, two in Africa, and so on. Imagine the billions we could save!

What do you think would happen if Ramaphosa were to cut his cabinet by half, and get rid of all deputy ministers? That money would feed millions of poor South Africans, not a few ANC fat cats.

It is certain that Ramaphosa the crisis manager will not do the obvious. He will rather let millions of poor people starve. How sad.

As we begin to think we are human-gods, a little virus reminds us of our powerlessness.
Opinion
1 year ago
Next Article