Petty politics by big parties override the rights of residents 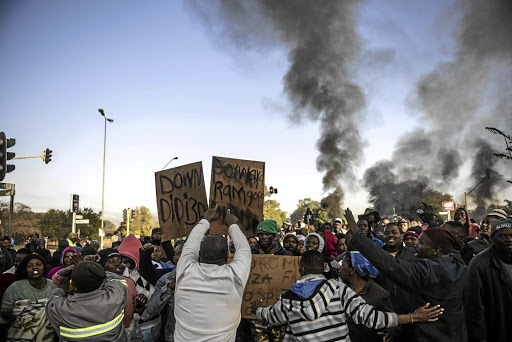 Tshwane residents during protests against ANC decision to select Thoko Didiza to run for mayor in 2016. The struggle for mayorship continues, this time in the council chambers. / Gallo Images / Nelius Rademan

Our politics is more about getting the spoils of office rather than giving the service necessitated by holding public office. You've just got to look at what's happening in the City of Tshwane.

The childishness and self-centredness of the DA, ANC and EFF councillors has rendered that municipality leaderless at a critical time when communities across the city are contending with a serious water crisis.

So preoccupied are councillors in that metro with palace politics that they are unperturbed by the deterioration of the quality of life on the ground.

Tshwane, the seat of the executive, and the administrative capital of the country, has become the talking point of open lines on talk radio as residents call in almost daily to vent the deplorable state of the city's administration.

The whole term of this council, since it started in 2016, has been about doing each other in. The agenda has not been about fulfilling the developmental mandate and objectives of local government as delineated in the country's constitution.

When the DA took over the metro, having secured the support of the EFF to form the executive, then mayor Solly Msimanga was intent on uncovering malfeasance on the part of the outgoing ANC.

The Gauteng ANC provincial executive committee (PEC) warned at its special meeting that the "phuma ngingene" - loosely translated as "my turn to eat" ...
News
2 years ago

Staying true to the DA's brand of opposition politics of pointing out the flaws of the opponent, Msimanga neglected to check his and his administration's own blind spots. Soon, they were in the spotlight for the very kinds of shenanigans they accused their predecessors - Kgosientso Ramokgopa and the ANC - of.

Before vacating office, Msimanga was embroiled in a tender saga, accused of irregularly awarding a contract to Glad Africa. He was also fingered for hiring unqualified staff and disregarding the merit of candidates - a practice the DA has eschewed and often highlights to distinguish itself from the ANC.

The ANC was deeply stung when it failed to retain control of the metro. Reflecting on its dismal performance not just in Tshwane but in other metros in the country, it placed the blame on the scandal then brewing over former president Jacob Zuma's Nkandla home.

But the ANC in Tshwane had a lot of reflecting to do after facing a revolt from residents in a number of townships, including Attridgeville and GaRankuwa, who protested prior to the local government elections to express their discontent over the leadership's handling of the selection of a mayoral candidate and councillors.

Those protests symbolised the ANC's mixed record of delivery, and overspending and wastage. It is how the patronage cookie crumbles, benefiting some leaders and communities handsomely while passing others by, leading them to cry foul.

The EFF has made a meal out of playing the DA and ANC against each other. Opting not to enter coalitions with the two big players, it has tried to come across as the arbiter in council as if to stand in the stead of voters against and between the DA and ANC. But the EFF's role hasn't been constructive and has in fact fuelled this self-defeating rivalry between DA and ANC councillors to the detriment of residents, who seem to be the last people on any of these politicians' minds.

The EFF sees the dissolution of council as another opportunity to bargain with its votes to get the big parties to make concessions that suit it. Sadly, a by-election is not going to solve the problem. What's happening in Tshwane, and in other municipalities, illustrates the moral bankruptcy of politicians and the political system.

The crisis in Tshwane is the tale of how the three biggest parties in parliament, who together represent the majority of the SA electorate, failed to run a metro in the best interests of voters and residents at large. What reason is there to trust these parties to do better following another election? But more promises are sure to follow.