Administrator ready to take over Tshwane 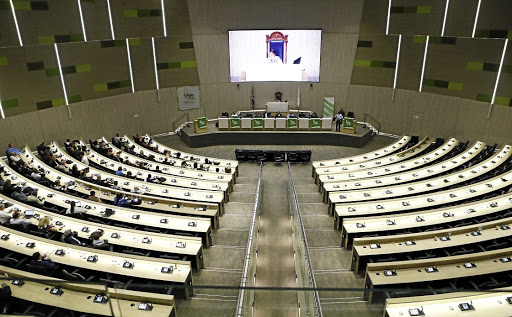 Vacant seats are seen after ANC and EFF councillors walked out of a meeting in the City of Tshwane Chambers on Thursday, 27 February 2020./Phill Magakoe

The collapsed Tshwane council meetings which caused the city to be placed under administration had a direct impact on service delivery. The city failed to pass budget adjustments and ratify the appointment of a city manager, among other things.

The failed council meetings would have dealt with salary increases for the city's employees, who are now left in the lurch. Without the city manager, Tshwane cannot approve urgent contracts like the relocation of flood relief victims.

These are some of the negative impacts that the political impasse in the municipality had on service delivery.

"The city manager's signature puts a lot of things in effect. In the absence of the city manager all the tenders that are supposed to work for the people of Tshwane cannot be processed," said a concerned senior councillor in Tshwane.

Premier David Makhura announced yesterday that the Gauteng provincial executive had taken a decision to dissolve the municipal council and place the embattled city under administration.

Tshwane municipality to be placed under administration

Tshwane metropolitan municipality has been  placed under administration.
News
1 year ago

The DA and the EFF in Tshwane held talks yesterday in a concerted bid to bring stability to the embattled metro.
News
1 year ago

He said the political instability in the city has led the councillors continuously failing to pass budgets, elect a mayor, supply water and pay its creditors, among others.

"Accordingly, the Gauteng executive council met on Wednesday afternoon to assess the developments in the city of Tshwane and decided to invoke section 139(1)(c) of the constitution," Makhura said.

"This means that the Tshwane municipal council is dissolved and an administrator will be appointed to run the municipality until a new council is elected within 90 days."

Tshwane becomes the first metropolitan municipality to be placed under administration in the country and the second municipality in Gauteng since the advent of democracy.

Makhura said they would, within seven days, compile a team that would be responsible for the administration of the city.

Effectively, all the functions that lay in the council, including the passing of budgets, would now lie with the administrators.

However, section 139 of the constitution says the decision to dissolve council can only take effect 14 days after the council has received the notice.

The DA, which governs the city, said the party would be challenging Makhura's decision as this was an undemocratic way of the ANC to gain back power.