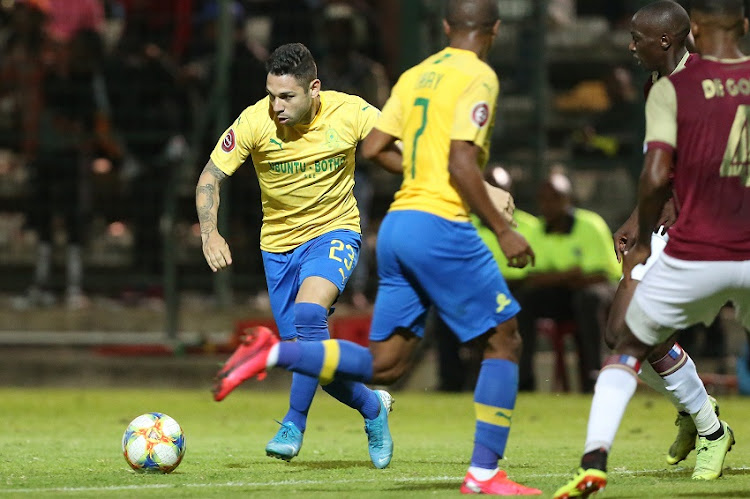 Ali Mezza of Mamelodi sundowns on the ball during the Absa Premiership match between Stellenbosch FC and Mamelodi Sundowns at Athlone Stadium on March 11, 2020 in Cape Town, South Africa.
Image: EJ Langner/Gallo Images

Mamelodi Sundowns scored early and then held on tenaciously for a vital victory by beating Stellenbosch FC 1-0 away in Cape Town on Wednesday night  to move within four points of Premier Soccer League log leaders Kaizer Chiefs.

It was a hard fought haul for the defending champions, who have a game in hand over Chiefs and keep up the mouth-watering possibility of a grandstand finish to the league season.

Themba Zwane scored after only nine minutes but if Sundowns were expecting that to give them an easy evening at the Athlone Stadium against the top flight rookies, they were handed a rude shock.

Captain Hlompho Kekana stole midfield possession away from Stellenbosch’s teenage debutant Ally Mshengi to set up the goal with Sphelele Mkhulise and Sibusiso Vilakazi setting up an easy finish from close range for Zwane, who now has nine league goals this season.

Ordinarily, such an early setback would sap the confidence out of an inexperienced team like Stellenbosch, but they quickly put that behind them to ensure a real contest.

Their own pressing game plus the use of pace down the flanks meant they more than matched Sundowns but when they got into the final third, the hosts were let down by poor passing and hurried shooting.

After the break, Zwane was denied a second goal after another Stellenbosch error saw him fire a point blank shot but this time denied by goalkeeper Lee Langeveldt.

With 25 minutes left, Stellenbosch should have equalised when Skelem kept a corner kick alive with a sharp touch at the back post. Defender Mogamad de Goede needed only toe-poke it in, but the ball got stuck between his feet and he missed.

Ovidy Karuru was then set up by a fine pass off the chest but substitute Ryan Moon but shanked the effort wide.

Tebogo Langerman suffered a serious-looking knee injury with 15 minutes left, after Sundowns had already used their three substitutes, leaving them to finish with 10 men.

Stellenbosch laid siege to their goal as a result but just did not have the armoury to break down the defence.