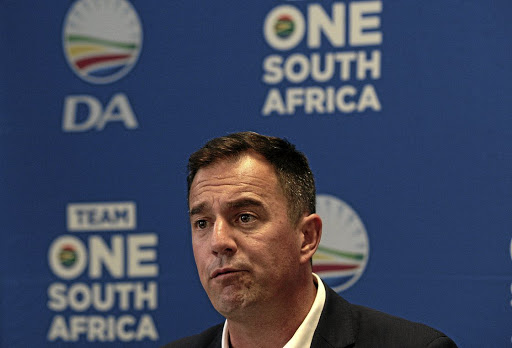 The DA and the EFF in Tshwane held talks yesterday in a concerted bid to bring stability to the embattled metro.

The two parties met to end a six-month long political impasse that has seen at least six council sittings collapse since last year.

DA leader John Steenhuisen said they were meeting the EFF to convince them not to walk out of council meetings and help them elect a mayor.

Steenhuisen said the talks were not necessarily about persuading the EFF to vote for the DA's mayoral candidate Randall Williams but were more about helping them run the municipality.

"Walking out with the ANC is helping to render this municipality useless and unable to deliver services. We are certainly not asking them to vote for a DA candidate but we are asking them to help us bring some stability in the municipality," Steenhuisen said.

"We can worry about positions afterwards. We can look at how mayco [mayoral committee] can be constructed, what positions we can give but we need to elect a mayor first before any of that can happen."

The EFF confirmed they were meeting with the DA but said it was not about electing the DA's Williams as they would also be putting up their own candidate for the position of the mayor.

The ANC, on the other hand, has not decided on whether they would be attending the next council sitting.

The ANC in Tshwane said it would be proposing that a new multi-party government be formed in Tshwane.

"There are currently seven parties in council and the ANC is proposing that the parties forward at least a representative each to form a metro unity government proportionally, so that council can continue without any further hindrance," regional secretary Eugene Modise said.

"The ANC will subject itself to the wisdom of the collective leadership provided by multi-parties in pursuit of a metro unity government. The ANC has no intention to bully or demand any specific position in that government."

The city's council has not been able to pass budgets and elect a mayor in about six sittings. Gauteng MEC for cooperative governance and traditional affairs Lebogang Maile is expected to make an announcement today on the actions he would take following the instability of the metro.