University of KwaZulu-Natal students' cause hurt by anarchy 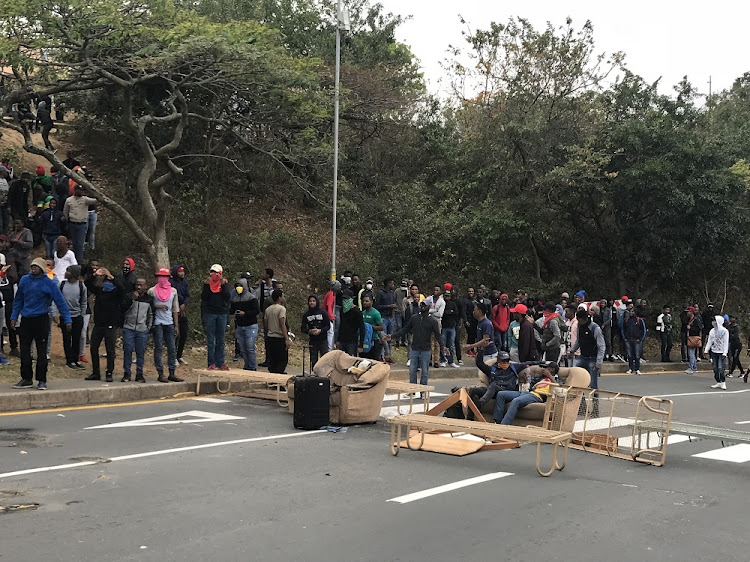 Whoever the people behind the fires at the University of KwaZulu-Natal are, they are undermining the students' pleas for funding, the writer says.
Image: Thuli Dlamini

We condemn acts of criminality displayed by protesters at the University of KwaZulu-Natal.

Students have a right to protest and voice their grievances against the institution or department.

However, burning down of buildings, as it has happened at UKZN, is a criminal offence, and those behind it must face the full might of the law.

The university had to suspend all classes yesterday, after a building that houses an exam centre and HIV support unit was set alight at the Howard College campus in Durban on Monday.

The same day, as the unrest spread to the university's other campuses, a section of a gymnasium and a mobile office at Westville, and a car at Edgewood were torched.

"The academic programme will resume on Monday, February 10. The decision to suspend academic activities was taken in the best interests of the university," spokesperson Ashton Bodrick was quoted saying.

Police fired rubber bullets at protesting students at the University of KwaZulu-Natal’s education campus on Monday after they allegedly assaulted a ...
News
2 years ago

Students are unhappy with the funding model. They are demanding that the 15% of their historic debt that they are required to pay before they can be cleared for registration be scrapped.

They took to the streets on Monday after the student representative council (SRC) said it had reached a deadlock in negotiations with the institution's managers.

Their grievances are genuine, they are driven by the hunger for education, but their actions communicate a completely different message of anarchy.

How is destroying infrastructure helping their fight against funding challenges? The same property that was damaged serves students, so setting it alight is senseless.

Marches and constant calls to the university management and minister of higher education would have worked but now nobody will be willing to negotiate with arsonists.

Whoever the people behind the fires are - a third force has been blamed by the student union - they are undermining the pleas for funding. They must be shunned and handed over to the police for the justice system to deal with them.

We also call on the students and minister of higher education Blade Nzimande to resume negotiations. UKZN must be able to start lessons without disruptions next week, in the interest of all involved.

The South African Union of Students has voiced its concern with what it described as "third forces" who seek to undermine genuine student issues.
News
2 years ago

Dependants of military veterans 'had been blocked'
News
2 years ago

Just the other day it was Precious Ramabulana who the parents sent to a place of learning, only for her to meet her untimely death.
Opinion
2 years ago
Next Article