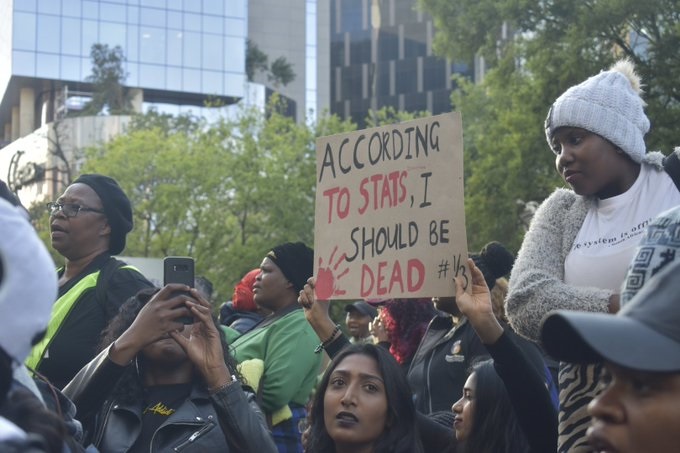 Women bare posters as they protest against gender based violence in Sandton.
Image: Twitter \ Andisiwe Manzana

The Sandton Stock Exchange was on Friday morning the scene of women's ire at the scourge of  femicide and gender based violence that has swept the country and dominated the headlines recently.

Protesters began to arrive at 3am, asking for something to be done to combat the killing of women.

Some in the crowd stated that the reason the protest was held at the JSE was to ask for money, since the government had claimed it could not combat gender based violence adequately because of funds.

Prompted by the high profile slayings of University of Cape Town student Uyinene Mrwetyana and boxer Leighandre Jegels, the growing discontent and rage has culminated in the action, taken under the banner #sandtonshutdown.

Femicide sentences not a deterrent

Though the number of women murdered in the 2018/2019 financial year decreased by 5,4%, the Rapodile family says more needs to be done to curb ...
News
2 years ago

SA is becoming an increasingly unsafe place for women and children to live in.
News
2 years ago
Next Article