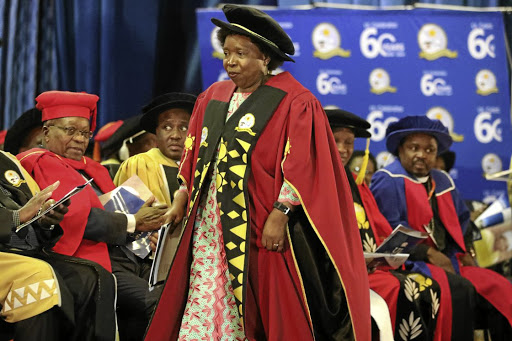 Chancellor of the University of Limpopo Dr Nkosazana Dlamini-Zuma during the ceremony on Friday. / ANTONIOMUCHAVE

Nkosazana Dlamini-Zuma might not have been a student at the University of Limpopo but her attachment to the institution dates back to the days of apartheid.

Dlamini-Zuma, who was inaugurated as the new UL chancellor, was among a horde of ANC members who used the university as a hideout and gateway to exile.

"Dlamini-Zuma has never been a student here but she has the connection to the university. It is here that some of the ANC members hid from the police during the height of apartheid. This university has a strong political history," UL vice-chancellor and principal Prof Mahlo Mokgalong said.

Dlamini-Zuma did not speak about her time in the Struggle during her speech, but expressed her delight to have joined an institution of the UL's stature.

The new chancellor also paid tribute to Tiro who was killed in Botswana by a letter bomb sent to him by apartheid security agents in 1974.

Tiro was a student at the university and at one stage was expelled from the institution.

"Tiro gave his life so that we can enjoy the fruits of freedom. He contributed to the South Africa we wanted," she said.

"Tiro died in Botswana but not at the hands of Batswana. He was killed by [the] SA apartheid regime."

The deputy minister of mineral resources was returning from an ANC Youth League event at the University of Limpopo on Friday when she was hit and ...
News
2 years ago

Dlamini-Zuma also called to the end of xenophobic attacks experienced in the country over the past three weeks.

This has forced the repatriation of some Nigerians and Mozambicans.

She said those who come to SA illegally should be deported.

"There are no means to come to South Africa illegally but there are ways to come here legally. So, those who are here illegally should be deported."

Dlamini-Zuma said foreigners in SA should not be attacked, whatever their status.

The former minister also condemned the gender-based violence in SA, describing it as a societal and institutional problem.

She said it was disturbing that women are being raped at high learning institutions or working places, saying this should come to an end.

She also called on institutions and companies not to employ people with criminal records of sexual offences. "People with rape convictions should not be hired or employed," she said to applause.

The inauguration was attended by former president Jacob Zuma, who was well received at the Onkgopotse Tiro Hall where the event was held.

Students at the Durban University of Technology shut down the institution on Friday and marched to a Durban hospital following the stabbing of a ...
News
2 years ago
Next Article