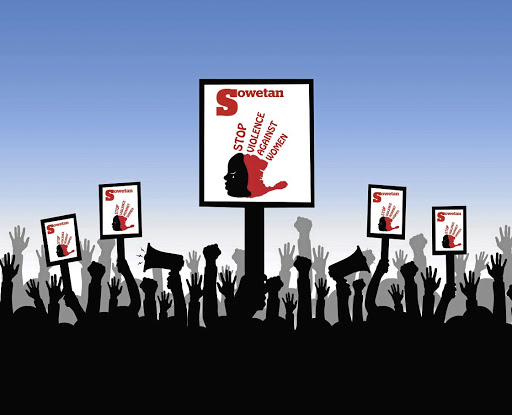 As I watched the #sandtonshutdown protest against gender based-violence this past Friday, what stood out for me was hearing a specific repeated plea, made by women to men.

I heard the plea throughout the weeks that preceded the march as well.

"Stop killing us. Stop raping us. Stop molesting us. Stop it," they chanted, the words incompatible with the splendour and opulence of their surroundings, the Johannesburg Stock Exchange, the heart of the African economy.

And as I always do when extreme violence bubbles over dangerously, as it seemed to over the past few months, I thought about a friend of mine, who years ago burst into his housemate’s room in a flat they shared, startled by her chilling screams.

Her out-of-control boyfriend was pounding her to a pulp with his fists, and when my friend tried to reason with him, the attacker turned his rage on him, shoving the peacemaker from the balcony of the 15th floor flat, to his death.

My friend’s death was not in vain. It taught me that in some men, women have potential allies, who recognise our humanity and will defend it to the death, literally.

It has also led me to wonder what role plain old terror and the natural desire for self-preservation has played in bringing us to this place.

Do perpetrators of gender-based violence, satisfied they can wreak havoc on women’s minds, bodies and existence any time and anywhere they want, also go out of their way to send a clear message to men who are inclined to help women, with acts like this?

As we go back and forth about whether all men are trash or whether all perpetrators of abuse are men, at what point are we going to channel all the momentum, attention, goodwill and solutions suggested into tangible, daily steps that address what ails our country right now?

What is sad about this is the artificial divide between sane men and women which lays fertile ground for the killers among us to silently add more bodies to the pile.

It's been said many times, criminals have held South Africans captive for years. A significant number of them are perpetrators of gender-based violence, who hide in plain sight, from church pulpits to post offices, from our bedrooms to police stations, propped up by deeply sexist institutions and attitudes.

What has surprised no one in my circle is the finding by a poll which determined that one in 10 South Africans believe men have the right to physically attack their partners.

Also not news is that the violence monster in our country is layered, and threaded tightly into the fabric of our society. It is always there, and every now and again, it presents a different face. The first few months of the year, it was school killings. Now, it is femicide and xenophobia. Who is next?

A male colleague of mine recently explained that getting offended at tags like #MenAreTrash when you do nothing to help a woman is weak. That inaction makes a man complicit.

He also said men weigh their own life and everything else that comes with it, including their children, against sticking their necks out for the woman in danger. Additionally, fear of ostracisation and isolation was a deterrent to calling out sexist or misogynistic comments by friends, he said.

Fear. The only remotely positive thing about this is overcoming fear is done by action, which happens to be exactly what we are calling for.