Femicide sentences not a deterrent 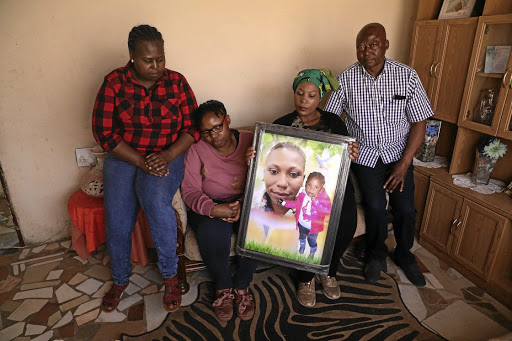 Mantombi, Dineo, Nomthandazo and Themba Rapodile are sad that the sentences of the killer of Nonhlanhla and Hlelokuhle Rapodile (in picture) will run concurrently. /Thulani Mbele

Though the number of women murdered in the 2018/2019 financial year decreased by 5,4%, the Rapodile family says more needs to be done to curb femicide in SA.

Police minister Bheki Cele yesterday revealed that the number of women murdered in the last financial year
decreased from 2,930 to 2,771.

The Rapodile family from Daveyton, who lost two family members to femicide, said courts should extend murder sentences to make sure criminals are fearful of killing.

Yesterday, Judge Portia Phahlane sentenced Antony Monyakeni to two life terms and five years for arson for the 2018 murder of his girlfriend Nonhlanhla Rapodile, 33, and her four-year-old daughter Hlelokuhle. The sentences will run concurrently.

A 17-year-old girl has become the latest victim of soaring cases of femicide after she was shot dead by her lover before he turned the gun on himself ...
News
2 years ago

"The sentence runs concurrently and we feel that he will still get a chance to get out and live his life outside after robbing us of two young lives," said Rapodile.

Monyakeni killed the two at their rented RDP home.

He was charged with defeating the ends of justice, malicious damage to property,
arson and tempering with a crime scene with the intention to conceal evidence.

According to the police, Monyakeni confessed to the double murder, claiming he killed his girlfriend after a heated argument.

Reported sexual offences against women decreased slightly to 36,597, a decrease of 0.4%.

There was also an increase in sexual offences against children, with 24,387 children falling victim, a 3.8% increase.

Another relative, Mantombi Rapodile, said what also hurts them was that Monyakeni
almost got away with murder.

"What still pains us until today is him arriving at the scene acting surprised and even helping us to clean up when he knew he killed them.

"We have found closure and we can finally start our healing process though most of us in the family are still going through counselling," said Mantombi.

Cele said the Family Violence, Child Protection and Sexual Offences (FCS) unit is one of the best units within the police service.

"The FCS has 185 units to deal with gender-based violence including sexual offences, the FCS recorded 658 life sentences out of 504 registered cases. It is through the highly specialised investigative work that 387 suspects were sentenced to 20 years and above," said Cele.