Ramaphosa is blocking progress through his dour appointments 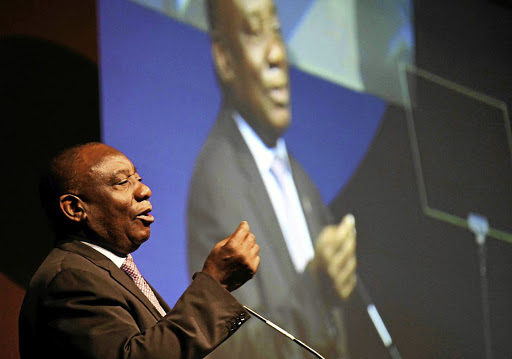 President Cyril Ramaphosa is challenged to walk the talk as far as his 'new dawn' is concerned, lest it turns into a pipe dream by his reluctance to appoint forward-thinking people.
Image: GCIS / Jairus Mmutle

Surrounded by academics in a seminar at the University of Johannesburg (UJ) last week, President Cyril Ramaphosa detonated a lie he told before the elections - that he was going to create jobs.

Embarrassed by the transparent idiocy of mendacious conduct while standing on an academic platform, Ramaphosa truthfully told the nation that more and more people in SA "will lose jobs".

Ramaphosa says people will lose jobs because of "technology, climate change and lack of skills". Even an innocent soul as unthinking as DD Mabuza knows it. He told parliament on Thursday that people are losing jobs at Standard Bank due to the impact of technology.

It is negatively encouraging that both Ramaphosa and Dodgy David (DD) in the presidency have heard something about the Fourth Industrial Revolution.

It is, however, lamentable that Ramaphosa's actions betray a woeful understanding of what it will take to prepare South Africans for the technological headwinds of our immediate and distant future.

At the superficial level, Ramaphosa seems a tad right-headed. He knows that only a skills revolution can prepare SA for a technological tomorrow.

But, at the practical level, Ramaphosa's conduct reveals an incapacity to answer that timeless question - What is to be done? That a skills revolution is a big part of what must be done to prepare a country for the future is banally true. But how could the same president who appointed Angie Motshekga and Blade Nzimande as ministers of education hope to effect a skills revolution.

Even the blind can see that both Motshekga and Nzimande are expired dinosaurs who have not even the most basic conception of modern education. To hope that SA's skills revolution will come from such fossils reveals a great deal about the emptiness of Ramaphosa's own mind.

After trying to dupe SA at state capture inquiry, Zuma has proved he is the idiot

He went to the inquiry with a two-pronged strategy: play victim and claim not to know or remember anything
Opinion
2 years ago

Our greatest trouble as a country is that Ramaphosa does not know how to place capable people in critical positions. At the technical level, where it matters most, Ramaphosa appoints lightweights. Anybody with a bit of time should look at Ramaphosa's head of policy in the presidency, Busani Ngcaweni.

In a proper country, a hollow tin like Ngcaweni would never come anywhere close to such a nationally strategic position. Read O Won-chol's book, The Korea Story, and you will understand what kind of thinking technocrat qualifies to sit in a genuine policy office of a president.

Emerging from the disastrous Jacob Zuma years, many South Africans treat Ramaphosa as if he were a breath of fresh air - mainly due to his dignified demeanour and suave posture.

Unfortunately, SA's ailing economy will not be turned around by demeanour and superficial sloganeering. It will take serious thinking and practical action by a leader who can mobilise technical expertise to implement a modernising economic plan.

A fool in Shakespeare's King Lear wonders how the king became old before he was wise. If Ramaphosa can still learn, he would profit from reading three super-important books about how to turn a backward country into a modern economy.

US does not rule the world, just as English's not a global lingua franca

The first is From Third World to First by Lee Kuan Yew. This book can teach Ramaphosa how to modernise the state as a critical engine of national progress. Today's Singapore is an outcome of ideas in the book.

The second, The Korea Story, can teach Ramaphosa how to put together and implement a national industrialisation plan that can create factories and jobs.

South Korea is there as evidence. The last and equally important book is Deng Xiaoping and the Transformation of China by Ezra Vogel. This one can teach Ramaphosa how to re-engineer a broken ruling party in order to fix a backward society and a dysfunctional state. This book tells how China did it.

Most people in SA are offended by any suggestion that Ramaphosa cannot think seriously. Well, try and reconcile his pre-election promise of jobs and his confession at UJ last week.