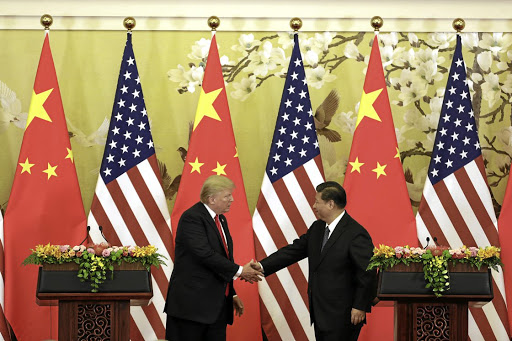 US President Donald Trump, left, and Chinese President Xi Jinping meet and greet at the Great Hall of the People in Beijing, China, in November 2017. The two countries are embroiled in a trade war that could result in a global power shift.
Image: Qilai Shen/Bloomberg via Getty Images

We South Africans are so consumed by the mess of our politics that we rarely take time to make sense of what is going on around the world.

During the centuries-long period of crude empire, rulers of kingdoms, principalities or states derived a sense of greatness from either invading, destroying or subjugating other societies.

Kingdoms or states that had a reputation for greatness were those that mastered the craftiest military strategy, typically under the leadership of a feared commander-tyrant.

Names such as Hannibal of Carthage, Julius Caesar of the Roman Empire, Alexander the Great of the Greek kingdom of Macedonia, or Shaka Zulu of the Zulu kingdom, are emblematic of the ancient world of the crude empire.

The tyrants and military strategists of yore harboured the belief they could destroy the society next door without being destroyed in turn. It was always a bloody gamble.

In the era of the Westphalian state, the same urge to destroy or subjugate a neighbour, with the hope not to be destroyed, drove modern rulers into wars of crude imperialism. This is how the first and the second world wars came about.

The frightening scale of human destruction that took place, especially in the World War Two, facilitated by a more sophisticated modern weaponry and awakened humankind to the suicidal folly of the hope to destroy without being destroyed.

Thus, the last European lords of crude empire - Great Britain and France - realised the need to entrust their global security and interests to the new leader of an emerging period of subtle empire, the US.

In the new era of weapons of mass destruction, the US knew it enjoyed no luxury to destroy a neighbour without being destroyed.

Banking on its economic strength in the mid-20th century, the US sponsored the erection of a novel institutional architecture that would buttress that country's leadership in the new era of subtle imperialism. That's how the UN, World Bank, International Monetary Fund and World Trade Organisation came about.

Although there were times when the US applied crudity in its imperial engagement, particularly during the Cold War, internal democracy and the protection of human freedoms were used to project the cultural and ideational supremacy of the US in the world.

Over time, ordinary people across the world, even in countries that professed to pursue an alternative social order, such as Russia, envied American culture and its way of life.

It all collapsed in 2008, when America's financial system proved to be the cancerous cells infecting the economic blood of the rest of the world. Suddenly all American-linked or -sponsored institutions became suspect in the eyes of the people of the world.

By the time America's subtle empire collapsed, China had sufficient economic resources to signal its readiness to take over the global leadership.

But the US does not want the locus of global power to shift from the West to the East. This is precisely what the trade war between China and the US is about. But where does SA stand in all this? Unfortunately, there is no evidence that either our intellectually bland president or our tired international relations minister has a clue.