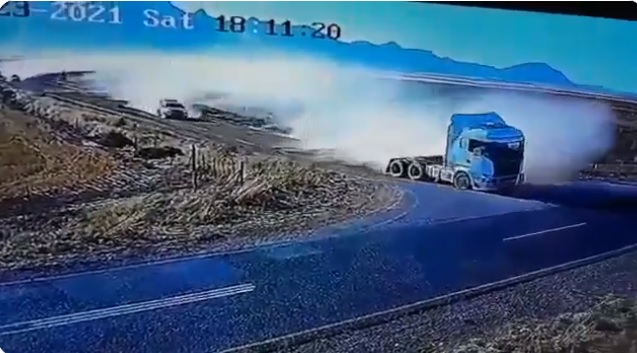 Police said the man stole the 29-ton Scania truck in front of a bank in Porterville.
Image: Screengrab of video

A dramatic Fast & Furious-type scene unfolded in the town of Porterville, in the Western Cape, at the weekend after a man stole a truck and sped through the streets.

Several videos of the high-speed chase showed the runaway truck bursting through the streets and later even managing to evade a police roadblock.

According to police spokesperson Capt FC van Wyk, the 27-year-old alleged truck-jacker stole the 29-ton Scania truck in front of a bank in Porterville.

Van Wyk said the truck was idling with the key in the ignition.

“The truck driver (complainant) informed a traffic officer who was in the vicinity of the incident. The complainant and traffic officer started to chase the truck with the assistance of police and law enforcement,” he said.

#Theft This video show how suspect chase away from @SAPoliceService in Porterville, Western Cape after he stole this truck on Saturday. The truck was however pulled over by police and suspect was arrested. Video received.. @BOSBEER2006 @1SecondLater @MARIUSBROODRYK @News24 pic.twitter.com/hjapjWzX7D

Van Wyk said the truck-jacker drove the rig in the direction of Piketberg and local police assistance had to be called for.

He said two vehicles belonging to law enforcement were damaged when the truck turned in the direction of Eendekuil.

Two officials were injured when the truck hit their vehicle.

The police managed to bring the truck to a halt and arrested the suspect.

He appeared in the Porterville magistrate's court on Tuesday on a charge of theft of a motor vehicle and the matter was posted to February 9.