Covid-19 hasn’t stopped criminals from preying on society — but alleged hijackers stalking the locked-down streets of Browns Farm, in Cape Town, met their match when Nyanga police hunted them down.

Two hijackers were arrested in dramatic fashion on Sunday after they failed to outrun members of Nyanga police’s Browns Farm sector team, who had been deployed in the area in an effort to clamp down on an escalation in hijackings.

“The vehicle was reported hijacked on Saturday in Ntselamanzi Street in Browns Farm,” she said.

Angry residents in Orlando apprehended a pair of thugs who had attempted to break in and steal learning material at Ditawana Primary School on ...
News
2 years ago

Experts believe the recent looting at shops and vandalism of schools are a mix of sheer criminal activity and people acting out of pure desperation.
News
2 years ago

“The driver of the vehicle sped off when he saw police following them. A high-speed chase ensued. The driver and two occupants jumped out of the vehicle and ran into nearby shacks, but police managed to arrest two suspects, aged 18 and 26.”

The 26-year-old suspect was found in possession of an imitation firearm. A week earlier he had appeared in court for the illegal possession of a firearm and was out on bail.

The suspect also has a number of previous convictions for possession of stolen property, drugs and an imitation firearm.

The imitation firearm found on the suspected hijacker.
Image: SAPS 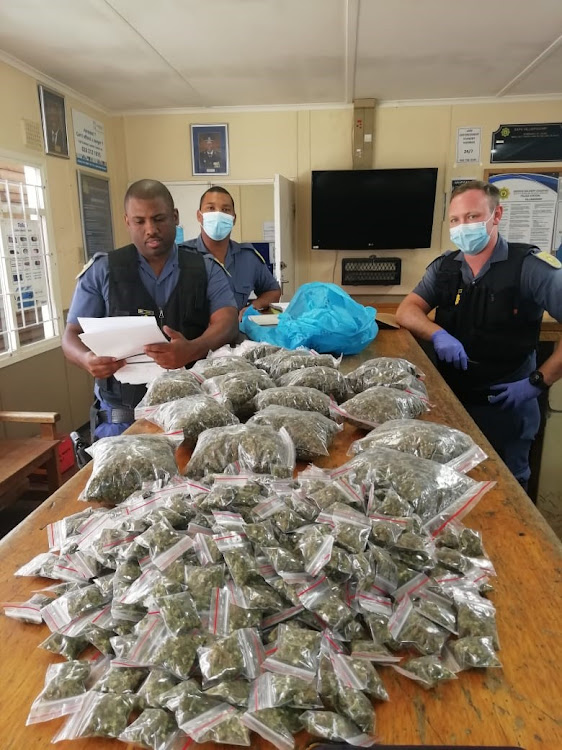 Villiersdorp police pose with a 3.64kg consignment of dagga confiscated at a roadblock near Grabouw on Monday.
Image: SAPS

“Both suspects are expected to appear in the Athlone magistrate's Court on Tuesday April 21 for the possession of a hijacked vehicle and possession of an imitation firearm,” said Rwexana.

“SAPS management commended the members for ensuring that perpetrators are brought to book.”

In a separate incident on Monday morning, Villiersdorp police manning a roadblock intercepted a 3.64kg consignment of dagga.

“Members of SAPS, assisted by other law enforcement agencies, conducted random searches of vehicles on the Grabouw Road at around 11am, when a minibus taxi raised suspicion,” said Western Cape police spokesperson Col Andrè Traut.

“The vehicle was searched, which led to the discovery of 3.64kg of dagga.”

The 30-year-old driver from De Doorns was arrested and is scheduled to appear in court in Caledon on Tuesday.