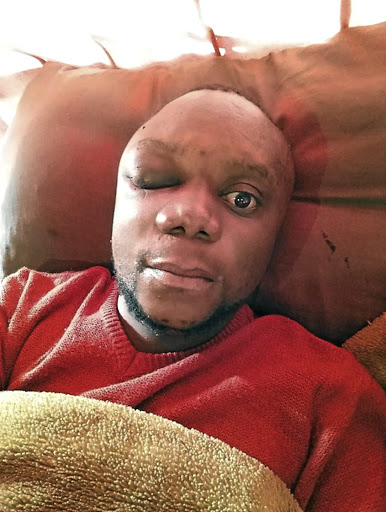 George Mamosadi was shot and assaulted, allegedly by police officers in Mpumalanga. / SUPPLIED

George Mamosadi is lucky to be alive after he was shot and assaulted allegedly by two police officers who accused him of failing to stop his vehicle at a stop sign during a roadblock.

Mamosadi, 42, of Emalahleni, Mpumalanga, was shot in the back during a high-speed car chase and assaulted, allegedly by the officers, at about 8pm on May 11.

This week, Mamosadi was visited by a detective from the police watchdog, the Independent Police Investigative Directorate (Ipid), to whom he gave a statement. He confirmed that he was visited by the Ipid detective on Tuesday.

Mamosadi's vehicle is riddled with six bullet holes at the back, two more on the right passenger door. Three of his car tyres had also been shot during the chase.

Mamosadi told Sowetan yesterday he was left traumatised and upset by the ordeal that began when he was stopped at a roadblock on the N4.

The businessman, who runs a hazardous waste material removal company, was travelling back home from Pretoria.

"I was on the N4 and I was approaching a roadblock near Balmoral when I was instructed to stop by police officers.

Police minister Bheki Cele has warned KwaZulu-Natal police officers not to be tempted by unscrupulous politicians ahead of the national elections.
News
2 years ago

"I stopped and spoke to an officer who was wearing uniform. After he checked my papers he said I could go," Mamosadi told said.

He said during the conversation, another police officer, who was not in uniform, told the uniformed officer to make Mamosadi wait because he had failed to stop his vehicle at a temporarily erected stop sign at the roadblock.

"I apologised to the officers and the one in uniform told me that I could leave.

"While approaching Vosman off-ramp, about 15km from the roadblock, I heard gunshots and became scared because I was once robbed and almost hijacked in Middelburg earlier this year. I thought it was those guys who previously attacked me," Mamosadi said.

Fearing for his life, Mamosadi said he sped off with the intention of going home.

He said he then decided he would stop at his office but also could not to do so due to the shots being fired at him.

According to Mamosadi, the high-speed chase lasted for about 10 minutes.

"I got onto the Old Pretoria Road where I was forced to stop because they had shot three of my car tyres.

"At that moment I also realised that I had been shot in the back. I tried to step out of the car but they were already waiting for me."

Mamosadi said he realised after he had stopped that he had been chased down by the officers he saw at the roadblock. He said the officers failed to alert him to stop as they drove in an unmarked vehicle without sirens and blue lights.

A 38-year-old KwaZulu-Natal cop will appear in court on Tuesday for shooting dead two brothers during an argument at the weekend.
News
1 year ago

"They pulled me out of the car and started to punch and kick me.

"When I asked them why they were assaulting me, they said they should have arrested me at the roadblock," he said.

Mamosadi was left with a badly swollen right side of the face and several broken ribs on the left.

"I am traumatised. I am scared of police officers. Whenever I see an officer I start shaking out of fear because of my experience."

He said the assault lasted for approximately four minutes before officers in a police van who had been patrolling the area stopped and intervened.

Mamosadi was then taken to Vosman police station before he was taken to Witbank Hospital.

Prof Rudolph Zinn, professor of policing and forensic investigation at the University of South Africa, said he was concerned by the alleged conduct of the two officers during the incident.

"The officers should have approached the civilian with restraint and care because he had already been stopped at a roadblock earlier.

"He was legally driving away and there was no reason for him to be stopped a second time," Zinn said.

He said according to section 49 of the Criminal Procedure Act, which deals with the use of force, an officer would need to prove that an individual had committed an offence and would have posed a serious threat to someone else.

"They would need to prove to a court of law that they took all the measures to stop the person.

"The type of police vehicle they used from the roadblock would have needed to be marked because they can't believe that someone would stop their vehicle in good faith.

"This is not standard procedure and was probably an excessive use of force. I believe the officers should be charged with attempted murder."

Police spokesperson Brig Leonard Hlathi said the state opened a case of attempted murder on behalf of Mamosadi, while the two officers registered counter charges against him of resisting arrest and failing to stop at a roadblock.

Hlathi said he could not comment further as the matter was being handled by Ipid.

Attempt to get comment from Ipid drew a blank at the time of publication.

This despite the fact that Ipid spokesperson Ndileka Cola had promised to respond in writing about Mamosadi's case.

But Cola did not take calls when Sowetan contacted her later.

A "Ghost Squad" police officer shot and wounded a taxi driver who tried to ram into his vehicle on Friday.
News
2 years ago

Cop shoots himself after killing suspect in Khayelitsha

A 27-year-old police constable committed suicide with his service pistol after firing a fatal shot at a man while on duty in Khayelitsha at the ...
News
2 years ago

The shock of watching a man commit suicide had scarcely worn off when police made the grizzly discovery of the body of his 14-year-old daughter.
News
3 years ago
Next Article