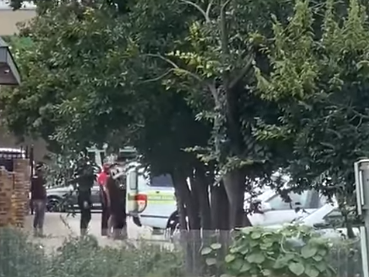 Police have confirmed that a police van was used to deliver alcohol in Centurion, in direct defiance of lockdown laws.
Image: Screengrab / via Facebook

A police officer has been bust moving liquor in a cop van, in direct defiance of lockdown laws.

This comes after Gauteng police were alerted to a video clip being shared initially on Twitter, showing people offloading merchandise — some of it clearly alcohol — from a marked police van.

In the video, men are seen taking significant quantities of liquor from the back of a stationary police vehicle and into a property.

Police confirmed on Thursday that a case of using a motor vehicle without the owners' consent and another related to the contravention of the Disaster Management Act had been opened against the police officer in question.

A Durban police officer will appear in court on Monday on allegations that he tried to solicit a R3,000 fine from a businessman.
News
1 year ago

Police spokesperson Brig Mathapelo Peters said that the SAPS media monitoring team in Gauteng was, on Tuesday, alerted to the video.

“An urgent investigation was launched to establish the video's origin as well as the location of the scene, the identities of the people, confirmation of what was being delivered, and to establish which office or station the vehicle is attached to.

“It was found that the incident happened at a shopping mall in a part of Centurion policed by Lyttelton SAPS, and that an unconfirmed volume of liquor was being offloaded from the SAPS van, suggesting that the state vehicle was used to illegally convey alcohol in contravention of the lockdown regulations,” said Peters.

An police officer in uniform was arrested in Polokwane this week, transporting thousands of illicit cigarettes.
News
1 year ago

Internal disciplinary proceedings will also be launched against the police officer.

Acting Gauteng police commissioner Maj-Gen Tommy Mthombeni commended the efficiency of the investigation into the video clip. He also thanked the person who took the video, who helped police in the preliminary investigation.

“When we saw the video clip our immediate concern was that no detail could be made out at face value, not even in which province the incident happened. An urgent and intensive investigation was therefore required to get to the bottom of this matter.

“It is thus pleasing that the investigating officer and everyone who contributed to the investigation understood the seriousness with which management of the SAPS viewed this incident,” said Mthombeni.

He also called on members of the public to continue reporting such issues.

“Members of the public are urged to continue to report non-compliance with the regulations and should not be afraid, especially when the transgressors are members of the SAPS or other law-enforcement agencies. No-one is above the law,” he said.