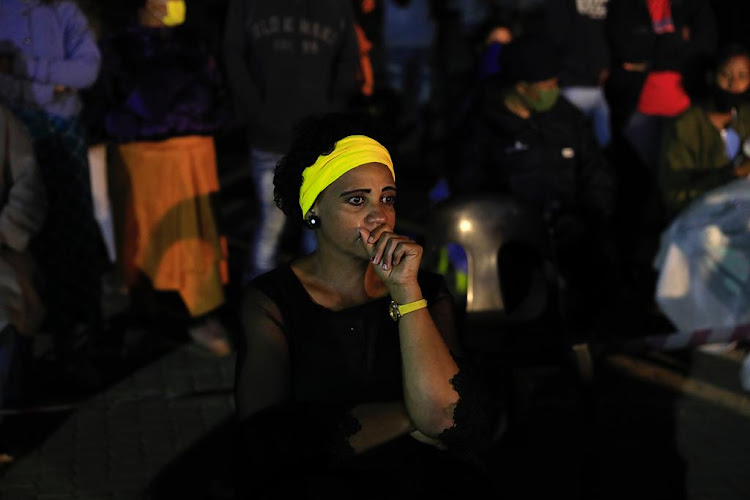 Family of Nateniël Julies at his memorial service in Eldorado Park on Thursday evening. The teenager was allegedly shot and killed by police.
Image: Alon Skuy

The community of Eldorado Park, south of Johannesburg, came out in their numbers on Saturday morning to pay their last respects to Nateniël Julies who was allegedly killed by police.

The funeral for the 16-year-old who suffered from Down syndrome was held on Saturday.

Nikkel Crescent Street, where Julies lived in a flat complex, was overflowing with people from all walks of life.

A hearse bearing a white coffin with Julies' body departed from his home in Hillbrow flats in Extension 8 at about 8.30am for his funeral.

Candles, flowers and pictures were placed on a vehicle on the side of the road in remembrance of the young man whose death has touched so many people.

Nateniël Julies' alleged killers appeared at the Protea magistrate's court on September 22 2020 to submit their applications for bail. Conflicting accounts arose during the court proceedings. Caylene Whiteboy, who allegedly shot Julies, alleged that fellow accused, Scorpion Simon Ndyalvane, had attempted to threaten her into lying to the court. Ndyalvane has strongly denied being complicit in the crime.

Tears and heartache as community gathers for Nateniël Julies memorial

Just over a week since teenager Nateniël Julies was gunned down, the community of Eldorado Park gathered to pay tribute to the boy on Thursday night.
News
1 year ago

Cyril Brown, Nateniël's uncle, said he was devastated and wished “Lockies” would run up to him and ask for a haircut, instead of seeing him laying lifeless in a coffin.

“He was a joyous young man. Words can’t describe what we saw this morning when we drove his body down. Seeing him so still really hurt us as a family because we don’t know him like that. The man at the tuck shop says he wishes he could run to his shop for biscuits.

“Seeing the mother cry breaks us. Life is so short; we must really spend our time with family and really love them. It’s emotional seeing him look so nice in his coffin with a haircut that I gave him that same Wednesday he was shot.

“He would have run to me and said, 'see mooi' [pointing] at his haircut. Weekends were our days,” Brown said.

Three police officers have been arrested in connection with the boy's death that allegedly happened when the young man failed to respond to questions.

Three police officers were injured on August 27 during protests after community members accused them of fatally shooting Julies the day before. Two officers were from the local police station and one was from the metro police department. They were deployed to restore calm in the area.

“We have lost trust in our local police ... He only had a packet of biscuits in his hands, no weapon or anything threatening. When he came into our presence at home, he changed the atmosphere. They have taken something precious from the family.

“But we don’t want to paint everybody with one brush,” Brown said.

Reverend Kenneth Meshoe, leader of the African Democratic Christian Party (ACDP), said the people who killed Julies should not get bail.

“They must be punished severely. I have prayed with the family and have pleaded with them to not harbour any feelings of anger but open their hearts to forgiveness,” Meshoe said.

More than 130,000 people have signed an online petition to demand justice for Julies.

Hazel Waydene, who started the petition last Thursday, wrote that Julies was “shot for no reason”, and alleged the police did not give a true account of the events which led to his death.

“When the police shot him, the boy fell under a truck. The cop pulled him out from under the truck, threw him in the back of the van and went to drop him at a hospital, and told the doctors he was involved in a gang fight, which is not true,” wrote Hazel.

Supporters of the petition called on the government to tighten its laws and end police brutality.

Faith Mohammed from the EFF said police “brutality” must end.

“We feel justice must be served, and corrupt police officials should be removed form all spheres in the country. When a person has killed, he is a criminal, whether a police officer or soldier. They need to pay for what they did,” she said.

The community of Eldorado Park in the south of Johannesburg, gathered to pay respects to Nateniël Julies on Thursday evening, a week after the ...
News
1 year ago

A third police officer arrested in the case of Eldorado Park teen Nateniel Julies has been charged for attempting to conceal the murder.
News
1 year ago
Next Article